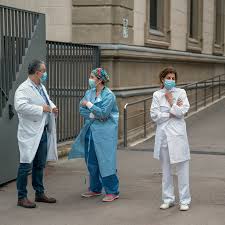 While most of the big cities, including all the metros, are in the red zone, the absence of field-level health workers in urban areas is emerging as a major hurdle.

Meanwhile, at the daily briefing on Friday, Health Ministry Joint Secretary Lav Agarwal said “it is important that we learn to live with the virus and practise behavioural changes”.

Even as Brihanmumbai Municipal Corporation (BMC) Commissioner Praveen Pardeshi was shunted out on Friday, sources in the Health Ministry said the high case load in Mumbai indicates the larger problem in big cities across the country.

While the National Urban Health Mission (NUHM) was cleared by the Cabinet in 2013, it was no longer a priority a year later. Hence, there is a shortage of dedicated health workers, like ASHA (Accredited Social Health Activist) workers and ANMs (Auxiliary Nurse Midwife), on the ground. Moreover, the structure of the Integrated Disease Surveillance Programme (IDSP) is designed for access into rural areas.

“The real problem, not just in Mumbai but in urban areas elsewhere, as we are finding out now, is the lack of surveillance infrastructure. The NUHM never took off. In the villages, we are using ASHA workers and ANMs – there are enough field-level workers, they just need to be mobilised. But where are they in the cities? Municipal bodies are not attuned to surveillance work,” said an official.

“The other surveillance instrument is the IDSP, with a three-tiered structure – national, state and district. The need was never felt to increase its presence in urban areas,” he said.

He said the structure of municipal bodies, in which sanitation workers and a sanitation inspector oversee areas, is not the right model for the intense, active case search and contact tracing that is needed for COVID-19.

Talking about Mumbai, a senior Health Ministry official said: “We are on the edge. They needed to quarantine early on. They did not do that. However, we are hopeful that we can still pull back.” So far, Mumbai has reported 12,142 cases and 462 deaths.

“In some states like Maharashtra, Gujarat, Delhi, Rajasthan, Madhya Pradesh and Tamil Nadu, there is a spurt. We are coordinating with state governments to strengthen containment efforts,” said Agarwal.

However, officials who visited Mumbai said there is still no community transmission in the city, adding that the fever clinics outside the containment zones and the surveillance for influenza-like illnesses in the buffer zones have not returned “any significant positives.”

The main problem, they said, is the impossibility of maintaining social distancing in the slums there. “In some of these places, people take turns to sleep – basically, four people spend eight hours each in one ‘shift’ in a room. Now, all 12 are crowded in the same space. How does distancing happen? We have asked for gyms, community halls, whatever is available, to be made into quarantine centres, use makeshift cardboard beds and shift people out. It’s not much, probably can’t even accommodate a fraction, but it’s still better than the current situation,” said an official.

Praising the system put in place by the BMC, an official said: “They actually did one better than what we asked for. We said one containment zone and one buffer zone. They even set up a third zone outside where they did the ILI surveillance. But they were lax in the containment zone, partly because of inexperience and partly because of the conditions of the urban slums.”

At the daily briefing, Agarwal said it is possible that “with adherence to social distancing norms and aggressive containment, India may never hit the peak.”

“When a fresh list of districts in red, green and orange zones is drawn up, we will share it with the states. But as we talk about relaxations and return of migrants, it is important that we learn to live with the virus and practice behavioural changes,” he said.

Randomised Controlled Trial, to assess the safety and efficacy of convalescent plasma to limit COVID-19 associated complications in moderate disease”.

The study has received approval from the COVID-19 National Ethics Committee (CONEC). The ICMR has shortlisted 21 hospitals for the trial – 5 in Maharashtra; 4 in Gujarat; 2 each in Rajasthan, Tamil Nadu, Madhya Pradesh and Uttar Pradesh; and 1 each in Punjab, Karnataka, Telangana and Chandigarh.