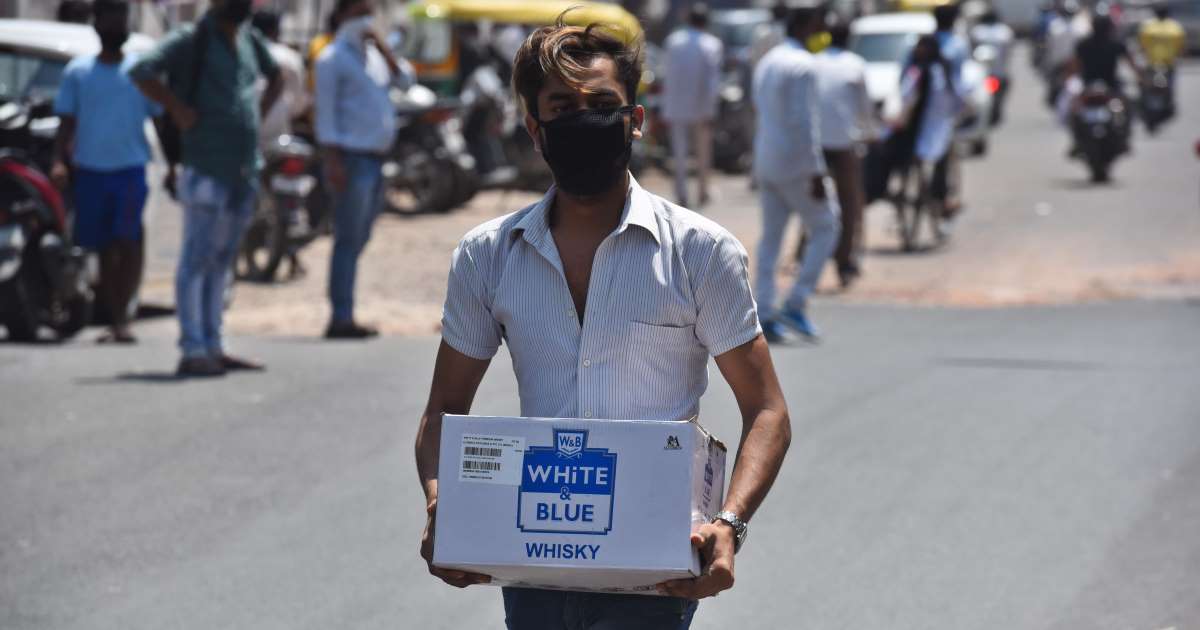 The Uddhav Thackeray government in Maharashtra will introduce an e-token system for the sale of liquor in the state on a pilot basis from Sunday onwards.

The move comes after the state witnessed a massive rush of tipplers, flouting social distancing norms to buy liquor at liquor stores. In view of the crowding, the Mumbai municipality has decided to keep 1,169 liquor stores within its jurisdiction shut for the time being. Two other districts -Osmanabad and Latur – have similarly cancelled permissions to these stores.

“We will run a pilot of the e-token in a city within the Pune Metropolitan Area to begin with. Plan is to then apply it across the state,” said a senior official from the state Excise department. The Arvind Kejriwal government in Delhi, where the state itself runs liquor vends, has already introduced an e-token system to avoid overcrowding at liquor stores.

Further, Maharashtra has begun exploring the option of permitting home delivery of liquor as an option to ease overcrowding and ensure social distancing. While excise duty is the third largest revenue grosser for the state’s exchequer, the government continues to promote a liquor prohibition policy on paper.

“We’re a prohibition state. The Maharashtra Prohibition Act, 1949, bans soliciting the use or consumption of alcohol. Even advertising or publishing leaflets related to alcohol is currently banned,” another senior official said.

The push for online liquor sales and home deliveries comes at a time when state revenue has been squeezed in view of the prolonged coronavirus lockdown. While the government has already estimated a loss of income to the tune of Rs 50,000 crore, an expert panel set up by it for measures to revive the economy has estimated that the state’s revenue in 2020-21 will fall 40 per cent or Rs 1.40 lakh crore short of its budgeted target.

In some ways, officials say that the long queues witnessed outside liquor stores since May 2 have somewhat popularised the belief that liquor drinking is a part of life for many Indians. Also the state has limited option to raise revenue under the GST regime; tax collections from the “sin good” seem like a low hanging fruit when other revenue earners will have to wait for the lockdown to be lifted and for some normalcy to resume to operations. For 2020-21, the government has targeted an income of Rs 19,225 crore from excise.

“Rules will have to be amended to permit home deliveries and online sales. The option is being studied,” said an Excise department official. Based on directives issued by the Finance department, excise authorities are also studying the routes taken by the governments of Punjab, West Bengal, and Chhattisgarh to permit online deliveries. Of these, Chhattisgarh, too, has introduced the e-token system. While the other two states have permitted home deliveries. Like Delhi, Chhattisgarh, too, has liquor vends run by a state-owned corporation.

Maharashtra, on the other hand, has licensed 4,159 country liquor stores, 1,686 wine shops, and 4,947 beer shops. State excise officials, however, are not in favour of permitting tie-ups of wine shops with food delivery companies. They are wary of sale of illicit and sub-standard liquor. They are more inclined to permit the local wine shop to undertake home deliveries in the neighbourhood. Another aspect that is being studied is how prohibition activists might respond to this switch towards liquor promotion.

Incidentally unlike in Delhi, the web link for Maharashtra’s e-token system will not be hosted on a government platform. “The Wholesale Wine Merchants Association, an industry body, has developed an application software which will be used for issuance of e-tokens for liquor,” informed an official.

Under the system, customers, after choosing their district and nearby wine shop, will be given a specific time slot for purchasing alcohol, cutting down on the wait and the queues at the stores. Meanwhile, the Excise department claimed that the crowding at liquor stores has eased since Friday.