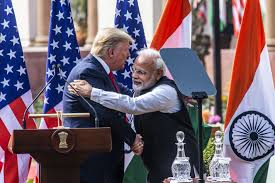 The United States President Donald Trump on Friday claimed that US is working with India to develope a vaccine for coronavirus COVID-19 and said that he is hopeful a COVID-19 vaccine would be available by the end of the year.

“Yes. We are working very closely also with India… We have a tremendous Indian population in the US and many of the people that you are talking about are working on the vaccine too. Great scientist and researchers,” he told reporters at White House.

He announced the appointment of a former head of vaccines at GlaxoSmithKline who will be spearheading the effort as researchers around the world scramble to develop a vaccine for the coronavirus that has killed more than 300,000 people globally.

Trump called the Indian-Americans scientists and researchers, who are contributing in the development of coronavirus vaccine as ‘great’. While on Friday, India’s number of COVID-19 infections crossed 85,000 surpassing China who has reported 82,933 cases.

“We stand with India and Prime Minister Modi during this pandemic”, he said

Though there is no immediate confirmation as to the number of ventilators that will be donated to India.