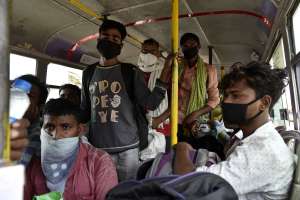 India may witness COVID-19 cases peaking in mid-July if the current lockdown is lifted on 30 May, a noted epidemiologist warned on Thursday as authorities announced guidelines to resume domestic air travel. Meanwhile, the toll from the virus rose to 3,435 and confirmed cases climbed to 1,12,359, according to health ministry figures.

India, the ministry said in its 8 am update, registered 132 deaths and 5,609 cases in the last 24 hours with most of the new cases being people having returned from other states or in some cases from abroad.

The mortality rate of COVID-19 patients in India, however, has remained less than half of the global average of 6.65 percent, the ministry said.

Maharashtra remained the worst-affected state on Thursday with cases, as per Union health ministry, rising to 39,297 and deaths at 13,90, followed by Tamil Nadu which has 13,191 cases and 87 deaths and Gujarat with 12,537 cases and 749 deaths. Delhi with 11,088 confirmed cases and 176 deaths is the fourth-worst affected state followed by Madhya Pradesh with 5,735 cases and 267 deaths.

Though the Central Government has promised all help to the state government, the fiercest cyclone to hit West Bengal in 100 years, is likely to mount problems for the state already grappling with the COVID-19 situation.

West Bengal has reported 3,103 cases as per health ministry’s data, but the mortality rate is relatively high with 253 patients having lost their lives from the virus. Bengal has the fourth highest number of deaths after Maharashtra, Gujarat and Madhya Pradesh.

Several states and UTs continued to report new cases on Thursday, with the national capital itself recording a spike of 571 fresh cases to take its total to 11,659. This was the third consecutive day when 500 or more fresh cases have been reported in a day in Delhi.

Gujarat reported 371 new cases to take its tally to 12,910, while 233 fresh cases were found in Ahmedabad itself. Gujarat chief minister Vijay Rupani launched a week-long campaign to educate citizens on issues related to COVID-19 and said that people should learn to live with coronavirus while fighting against it.

Maharashtra, the worst-hit state in India, recorded 2,345 new cases, taking the tally in the state to 41,642. This was the fifth consecutive day when the state has reported more than 2,000 new coronavirus cases.

In many of these states, the new cases largely included people having returned from other states or in some cases from abroad.

Uttar Pradesh Principal Secretary, Medical and Health, Amit Mohan Prasad told reporters that migrant workers coming from other states are being monitored by health workers and a number of them have tested positive.

“Over 5.42 lakh migrant workers were screened by health workers and among them 1,230 have been found positive for coronavirus. Samples of 46,142 have been sent for testing,” he said.

In Barabanki itself, 245 samples were sent for testing on 15-16 May, out of which 95 have been found positive for the virus infection.

Among those who tested positive, 49 are migrants who had recently returned from other states, while the remaining 46 are those who had come in contact with six infected persons and had been kept in isolation, district administration officials said.

In Bihar also, detection of more than 1,000 cases in the last three weeks has been mainly attributed to the large-scale influx of people who have been returning to the state from places they had been stuck in during the lockdown.

A similar trend has been seen across various states after special trains began operating on 1 May to ferry migrant workers back to their native places, while there have also been cases, including in Goa and Kerala, of those people testing positive who were brought back from abroad in special flights.

A noted public health expert and epidemiologist, cautioned that India may witness COVID-19 cases peaking in mid-July if the current lockdown is lifted this month-end, but also hoped that there could be a “lower surge” in the wake of strong containment measures taken in the past two months.

India is currently, the 11th worst-affected country in the world with India’s tally of active cases at 63,624 as of Thursday, the fifth largest in the world after the US, Russia, Brazil and France.

The government officials, however, stressed that the time taken in India for the case count to move from 100 to one lakh has been much better at 64 days, which was better than many other badly-hit countries and actually double the time taken in the US and Spain.

Globally, more than 50 lakh people have tested positive for the deadly virus infection since its emergence in China last December, while nearly 3.3 lakh have lost their lives. More than 19 lakh people have recovered so far.

The Union Health Ministry also said that India’s mortality rate is at 3.06 per cent, which is less than half of the global average of 6.65 percent.

Timely case identification and proper clinical management have helped India keep its mortality rate lower, it said in a statement.

It also said that more than 3,000 people have been cured in the last 24 hours itself and the overall recovery rate is improving continuously and has crossed 40 percent now. Close to 46,000 patients have recovered from the deadly virus in India.

The Ministry said all patients are under active medical supervision, while around 2.94 per cent of all active cases in ICU.

The Indian Council of Medical Research (ICMR) said there has been a 1000-fold increase in the number of COVID-19 tests done per day in the last two months. More than 25 lakh tests have been done so far.

Meanwhile, authorities announced detailed guidelines for resumption of domestic flights after a gap of two months, while business activities and public movement gained further momentum on the fourth day of the much-relaxed fourth phase of the nationwide lockdown that has been in place since 25 March.

Unveiling a set of detailed pre-flight, in-flight and post-flight guidelines to be mandatorily followed by airlines and passengers, the civil aviation ministry said that air travel resumes on 1/3 of the approved summer schedule for domestic routes and gradually scaled up.

The government has also capped airfares as per seven price bands based on time of travel till 24 August, while also making baggage sanitisation, thermal screening and Aarogya Setu app must except for kids under 14.

On Thursday, the Union Home Ministry sought strict adherence to its guidelines, including for wearing of face covers, ensuring social distancing at work, transport and in public places, while also asking states to ensure strict implementation of night curfew from 7 pm to 7 am, saying it has noticed violation of the restrictions at several places.