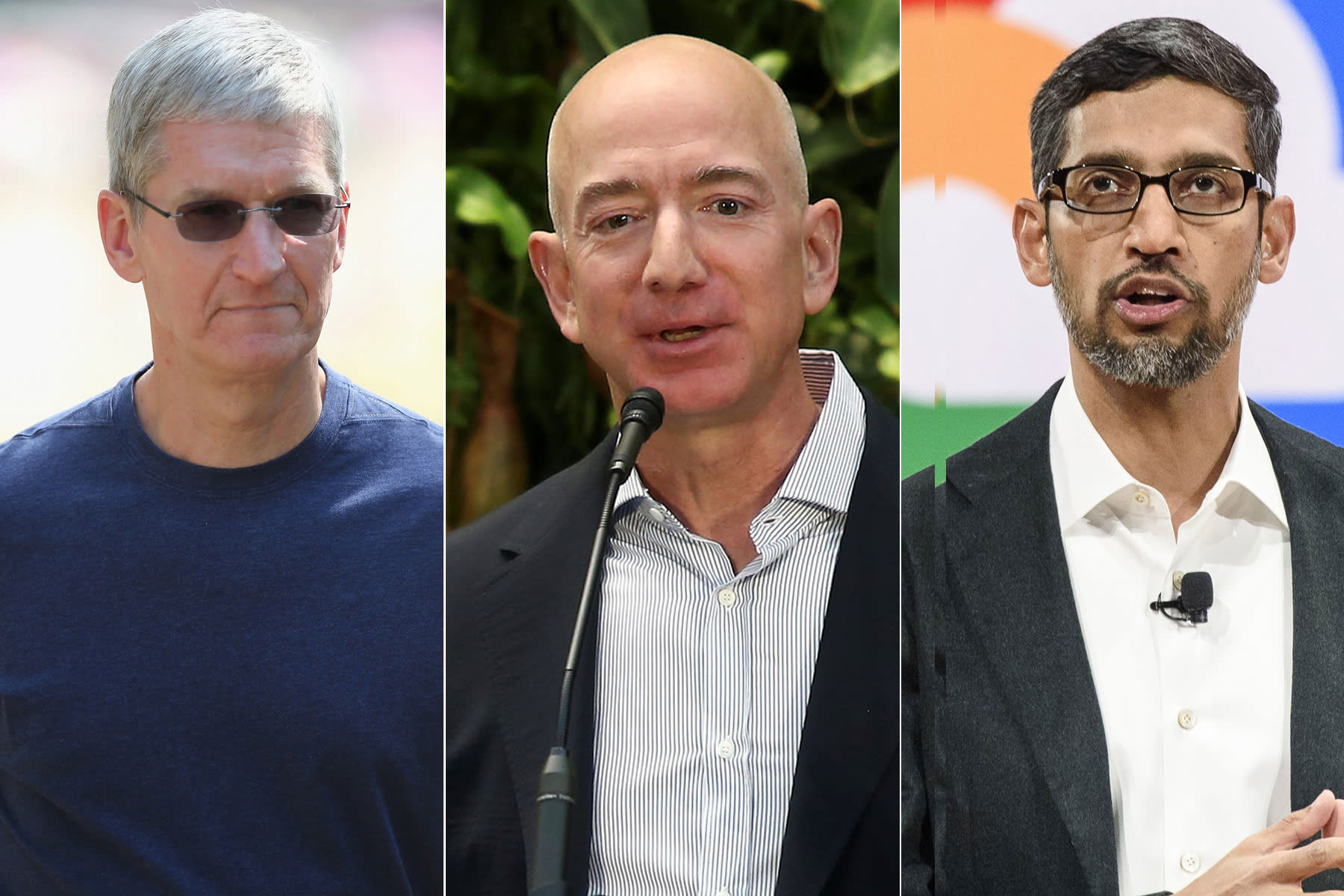 The big day of the unprecedented hearing is here, where the four most powerful technology executives of the world are coming together to answer questions thrown at them by members of the US Congress. The lawmakers are treading cautiously this time, with only the antitrust subcommittee of the House Judiciary Committee set to put forth targeted questions at Amazon founder and CEO Jeff Bezos, Apple CEO Tim Cook, Facebook founder and CEO Mark Zuckerberg, and Google and (its parent company) Alphabet’s CEO Sundar Pichai. While these four companies, arguably among the mightiest companies in the world right now, have testified before the US Congress together, this hearing is unprecedented for the fact that this is the very first time that all the four top executives will be answering questions together, in one platform.

The hearing will be held remotely owing to the Covid-19 pandemic, and cover a wide range of questions regarding the might of these four companies. Primary questions will revolve around the market domination of each of these companies, their market practices, and attempt to understand whether they are stifling an open, competitive atmosphere in their respective industries. The subcommittee will also attempt to look into whether each of these companies need to be broken up to maintain a balance, and on this note, lawmakers in the US Congress will combine responses from this session with hundreds of hours of interviews, and a reported set of 1.3 million documents put together, to understand what is the nature of the new set of legislations that are required with regards to antitrust laws, as well as imposing necessary regulations in the field of technology.

News18.com will be back with more analysis and coverage on this precedent-setting hearing with the four biggest CEOs in technology, in the morning

As we head into the third round of questioning, led by Dem. Jerrold Nadler, we leave you with the live stream of the questioning here:

With that, we sum up two full rounds of questioning by the antitrust sub-committee of the US Congress’ House Judiciary Committee.

Rep. Gaetz now asks Pichai about manual involvement about search curation, which itself can be a major proponent of aspects like bias in the ever-so-powerful Google Search.

The question now squarely falls on Amazon’s monopolistic Alexa ecosystem. “Of course we do use our own devices to promote our own products, that is common business practice,” says Bezos.

With that, comes up Amazon’s Echo speakers, which Raskin states that Amazon prices its devices below cost, which makes it impossible for competitors to exist in the smart speakers space.

Dem. Raskin alleges that Amazon is using its power in one domain, to increase its power in another domain. Case in point: Its HBO deal to “take over people’s homes too”.

All four CEOs pledge to take immediate actions against any slave labour, if such incidents are found.

Rep. Ken Buck’s second round brings up privileged counterfeit product sellers on Amazon, and how it failed to remedy the issue until it benefitted Amazon majorly.

Dem. Jayapal pushes Facebook to answer exactly how many competitors has Facebook copied from. Then follows it up with how many has it copied and acquired. Then further backs it up with whether Facebook copied and threatened Instagram founder Kevin Systrom, thereby pressurising a competitor into succumbing to Facebook’s power. Another allegation comes up on whether he implemented a similar threat tactic on Snapchat founder Evan Spiegel, when attempting to take over Snap Inc. Zuckerberg, very unnaturally, looks ruffled.

At this point in time, it may be interesting for you to note that Tim Cook is, in fact, also a part of this hearing. Reckon he’s already had a few prompts from his Apple Watch to stand up and walk around.

Rep. Jim Sensenbrenner draws very PR-like pledges from Bezos and Pichai that they will comply with fair usage and regulation of data.

Bezos gets caught up in his own words thanks to cross-questioning between multiple Congress members. “We are still investigating matters of data manipulation for anti-competitive practices,” is all he could come up with.

The direct allegation states that Amazon clearly sets the rules of the game, as a result of which too many small businesses have been put out of business. “You are a data company,” Cicilline sums up ideally, which underlines the market threat that Amazon represents.

Bezos answers Cicilline’s allegation of Amazon being similar to a “drug dealer”, with a very PR-like answer.

Cicilline says close to 800,000 people depend directly on Amazon for livelihood, and this brings in a major allegation – Amazon regards its “partners” as “internal competitors”, in-house.

Dem. Lucy McBath directly alleges yet another instance of how Amazon stifled a bookseller on their platform. Not only that, but Amazon did not even respond to allegations, and has not even reverted to the seller’s concerns. That directly crosses Amazon’s supposed line of growing based on small vendors.

Neguse’s robust questioning brings Zuckerberg to not deny that Facebook had its fair share of anti-competitive practices historically. More importantly, he CONCEDES that WHATSAPP WAS A COMPETITION TO FACEBOOK PRIOR TO ITS ACQUISITION.

After Jordan faces backlash for trying to forcibly push his political agenda that is very evidently outside of the purview of this hearing, Dem. Mary Scanlon directly alleges a clear anti-competitive practice made by Amazon on Diapers.com.

Demings highlights to Pichai the amount of user data that Google has, and calls it ‘staggering’. She further states that Google’s activities today do not reflect with the philosophies of its founders.

Dem. Val Demings begins by stating that Google’s spam filtration has nothing to do with a political party, and then proceeds to called Pichai, ‘Pukhai’.

Steube now alleges that electoral campaign emails from conservatives are being deliberately marked as spam by Google. The main ground here is that if it is being done to a particular group of individuals with a certain political ideology, Google may use its power to do this to anyone.

Rep. Greg Steube now brings forth how Google hides and in fact de-ranks certain websites even on direct search. This can bring to light Google’s ‘search engine optimisation’ practices. However, Steube’s question takes a turn towards specific anti-conservative practices, instead of the company’s practices of a wider search engine bias.

Dem. Jayapal highlights the stunning amount of data that Amazon collects with reference to users as well as third party sellers on the platform, both of which can be supremely detrimental towards other brands. “You may allow sellers on your platform, but if you control the amount of data, that can stifle innovation in small businesses,” she says.

Dem. Pramila Jayapal directly targets Amazon’s lackadaisical approach towards how non-public brand data can be accessed by anyone in the company, which can majorly stifle competition.

I cannot guarantee you that we have never breached our policy on using other brand data to improve our own products, says Bezos. This is major.

Pichai claims that it complies with all data laws. But, things remain unclear on policies and user requirements, as well as how legal data requests are complied by the brand, compromising users.

Rep. Kelly Armstrong targets Google’s data dealings and its compliance with GDPR, with reference to its advertisement-related user data.