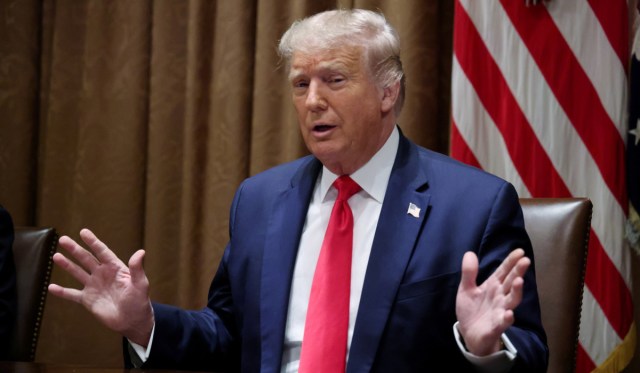 President Donald Trump on Monday barred federal agencies from dismissing U.S. citizens or green card holders and replacing them with foreign workers, and blasted a major state enterprise for having done so.

The executive order Trump signed Monday increases scrutiny of federal contractors’ use of H-1B visas to bring in temporary foreign labor for high-skilled jobs rather than relying on American workers.

The action was prompted by the federally owned Tennessee Valley Authority’s June announcement that it’s laying off 62 information technology workers as the federal power agency outsources data and programming work, according to an administration official who asked for anonymity.

The Covid-19 recession has thrown millions of Americans out of work, with uncertain prospects for a recovery given continued surges in virus case counts in many states. With the president running behind Democrat Joe Biden in polls ahead of November’s election, Trump’s move would showcase actions to support jobs. The administration also remains in talks with Democrats about extending extra jobless benefits.

Trump called TVA Chief Executive Officer Jeff Lyash’s outsourcing decision “disastrous and heartless.” Trump said the board must remove Lyash, or he’ll do it. He also said he’ll remove some board members, including Chairman James Thompson.

After being handed a note during the White House event, Trump said that he got a call from Lyash and that the TVA chief had indicated a “willingness to reverse course” on the announced layoffs. The TVA didn’t immediately respond to a message seeking comment.

The TVA’s board has defied Trump before. Last year, it voted 6-1 to shutter a coal plant in Kentucky that the president had pushed to keep open. The Paradise Fossil Plant Unit 3 got most of its coal from mines operated by a longtime and vocal Trump supporter, Robert Murray.

Then-TVA CEO Bill Johnson said the decision was about economics, and keeping rates as low as feasible.

Read More: Trump’s Love for Coal Not Enough to Save Money-Losing Plant

Trump’s new executive order requires federal agencies to give preference to U.S. residents and green card holders for contract positions, just as they would for full-time roles, the official said on condition of anonymity. The order also will prompt a study to determine how many federal jobs are held by foreign visa holders.

The Trump administration is working on other changes to the H-1B visa program that may be announced in coming weeks, the official also said.