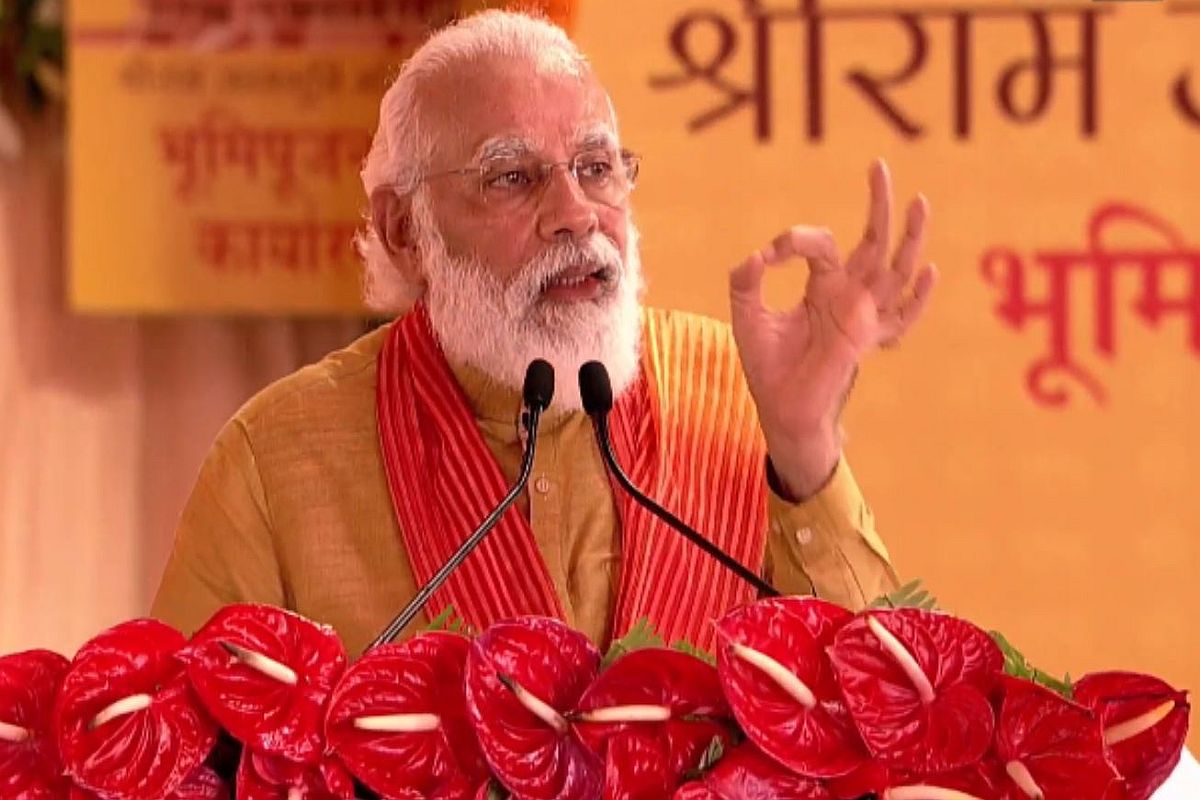 Prime Minister Narendra Modi, after performing the the ‘Shila Pujan’, ‘Bhumi Pujan’ and ‘Karma Shila Pujan’ of the proposed Ram temple in Ayodhya, said India is emotional and decades of wait has come to an end with the ceremony.

Taking to the stage after the conclusion of the ‘Bhumi Pujan’ of the Ram temple, PM Modi firstly urged the attendees to chant ‘Jai Siya Ram’ and said, “This call is resonating not only in the city of Lord Ram but throughout the world today.”

The Prime Minister further expressed his gratitude to all citizens of the nation, the Indian diaspora across the world and all the devotees of Lord Ram on the pious occasion.

Stating that a grand temple will now be built for Ram Lalla “who had been staying in a tent”, PM Modi added, “Today, Ram Janmabhoomi breaks free of the cycle of breaking and getting built again, that had been going on for centuries”.

“It is my good fortune that I was invited to witness this historical moment… From Kanyakumari to Kshirbhavani, from Koteshwar to Kamakhya, from Jagannath to Kedarnath, Somnath to Kashi Vishwanath, today the entire country is immersed in Lord Ram,” PM Modi said while addressing the country’s top saints.

He said the Ram Mandir will become the modern symbol of India’s traditions. “It will become a symbol of our devotion, and our national sentiment,” and added that “This temple will also symbolise the power of collective resolution of crores of people. It will keep inspiring the future generations”.

“With the construction of this temple, not only history is being made, but is being repeated. The way boatmen to tribals helped Lord Ram, the way children helped Lord Krishna lift Govardhan mountain, similarly, with everyone’s efforts, the temple construction will be completed,” he asserted.

Prime Minister Narendra Modi laid a 40-kg silver brick to symbolise the start of construction of the temple. The silver brick was donated by Mahant Nritya Gopal Das.

At the Bhumi Pujan ceremony, nine bricks were laid sent by devotees from around the world.

“Nine bricks are kept here… these were sent by devotees of Lord Ram from around the world in 1989. There are 2 lakh 75 thousand such bricks out of which 100 bricks with ‘Jai Shri Ram’ engraving have been taken,” the priest said during the ritual.

The date August 5 will down in history as a momentous occasion when Prime Minister Narednra Modi reached the Ram Janmabhoomi site in Ayodhya to set the construction of the grand Ram temple in motion, a reality that was the political and socio-religious dream of not just the BJP, but a vast section of Indians.

Dressed in traditional attire (dhoti and kurta), the Prime Minister first washed his hands before bowing before the deity — Ram Lalla Virajman. Amid ‘Shankhnaad’, Modi offered his prayers to the deity before making a parikrama of the shrine.

Next, he planted a ‘Parijat’ sapling in the temple complex at 12.03 p.m. and watered the plant.

He then proceeded for the ‘bhumi pujan’ ceremony after offering prayers at the 10th century Hanuman Garhi temple, accompanied by uttar Pradesh Chief Minister Yogi Adityanath.

The Prime Minister had reached Ayodhya in a chopper a little after 11.30 am.

Meanwhile, PM Modi has returned to Ayodhya after 29 years today for the Ram Temple groundbreaking ceremony. The Uttar Pradesh government said that PM Modi is the first prime minister to visit Ram Janmabhoomi.

Earlier today morning, Union Minister Ravi Shankar Prasad had shared a sketch from the original document of the Constitution of India showing Lord Ram, Sita and Laxman returning to Ayodhya after defeating Ravan.

Meanwhile, the design of the planned Ram Temple in Ayodhya was released on Tuesday by the trust overseeing its construction.

A series of images showed a grand three-storey stone structure on a raised platform with multiple turrets, pillars and domes. The temple will be 161 feet tall and almost double the size of what was originally planned, according to its architect.

The temple, to be constructed in Nagara style of architecture, will have five domes instead of two as envisaged earlier to accommodate more number of devotees, the architect said.

According to him, the project is likely to be completed in the next three years once the work commences.

In November last year, the Supreme Court had paved the way for the construction of Ram temple at the disputed site at Ayodhya, and directed the Centre to allot an alternative five-acre plot to the Sunni Waqf Board for building a new mosque at a “prominent” place in the holy town in Uttar Pradesh.