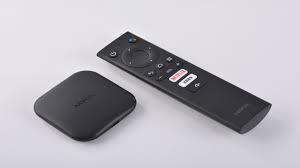 Flipkart has launched a new Android TV streaming box, called Nokia Media Streamer, as a part of its brand partnership with Nokia. It is priced at Rs 3,499 and will be made available starting August 28, exclusively on Flipkart. The device will go up against products like the Mi Box 4K, Amazon Fire TV Stick and Airtel Xstream box.

Nokia Media Streamer supports streaming content at a full HD resolution (1920×1080 pixels) and it runs Google’s Android TV 9 Pie operating system. The device comes with 1GB of RAM and 8GB of storage. It is powered by an unspecified quad-core processor paired with a Mali 450 GPU. The device also comes with a built-in Chromecast and support for Dolby Audio.

The device comes with access to the Google Play Store, using which customers can download and access a vast number of Android apps, including streaming apps like Amazon Prime Video, Disney+ Hotstar and more. Apart from Netflix and Zee5, the Nokia Media Streamer will come pre-installed with core Google apps such as YouTube and Google Play Movies.

To recall, Flipkart partnered with Nokia late last year for a licensing deal, which allows it to manufacture and sell smart televisions and television products under the Nokia brand name in India. Since then, the company has been launching Smart TVs under the brand, most recent one being the 43-inch 4K TV priced at Rs 31,999.