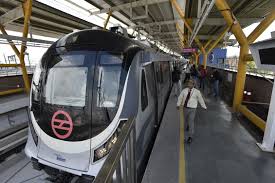 The Metro service in Delhi NCR, suspended since March 22 in the wake of the coronavirus outbreak, is likely to resume in September in a limited manner.

An official of the Ministry of Home Affairs said Monday that a plan to operate the service at 50 per cent capacity, with strict enforcement of social distancing and hygiene norms, is being considered.

The announcement on the resumption of the Metro service in the NCR, the official said, may form part of Unlock-4 guidelines expected in the coming days.

State governments, the official said, are still not in favour of reopening schools and colleges, so the restrictions on educational institutions are likely to continue.

“The government is also not yet in favour of re-opening multiplexes because of the closed environment, and swimming pools,” the official said.

Entertainment parks, theatres, bars, auditoriums, assembly halls and similar places are also not likely to reopen in the next phase of Unlock. The ban on social, political, sports, entertainment, academic, cultural, religious functions and other large congregations too is likely to continue.

On the resumption of the Metro, Union Minister Hardeep Puri, speaking at the Idea Exchange programme of The Indian Express Monday, said: “The hard facts are DMRC MD Mangu Singh and Metro have been ready to operate the services for about two months now. I periodically talk to him.”

“Delhi Metro is a very professional organisation. They were ready two months ago. And the DMRC MD tells me that services can resume at a two-day notice. I think everybody has agreed now. Not just the central government, but the state government and the DMRC also believe that the time has come to resume (the service),” he said.

“Now whether you resume in a calibrated manner… even the Ministry of Civil Aviation started with 33 per cent and now we will expand more. I personally think Delhi Metro should resume very quickly; this is not a decision that I take, but the input that I have provided to the decision-making people is that let us get it started, and I am hopeful it will happen very soon. I saw a statement by the CM who is saying the same thing,” Puri said.

Delhi Chief Minister Arvind Kejriwal and his government have been pushing for resumption of the service. On Sunday, when he met a group of traders, Kejriwal requested the Centre to resume the Metro in Delhi even if it is not done in other states.

DMRC spokesperson Anuj Dayal said the public transporter will be prepared to commence operations whenever the government issues directions.

“All necessary guidelines in place to combat the spread of the Covid-19 virus shall be implemented, and all efforts shall be made to make travel safe for our valued commuters,” he said.

The Metro service has remained suspended since March 22. The daily average ridership is between 27 lakh and 32 lakh, and daily ticket sales bring in nearly Rs 9 crore.

The shutdown has affected the finances of the corporation, which announced a pay cut for its employees on August 18.

Asked about the Metro’s finances, Puri said DMRC is in a healthy state. The fare hike, which came into effect in two phases in 2017, has ensured that DMRC remains in the “pink of health” financially, he said.

“Now everybody is affected after Covid. We will take a view along with all the stakeholders, whichever government agency is involved, and we are committed to economic revival at the fullest. And as we go along, we will see whatever help Delhi Metro requires, whatever the other systems require,” he said.

Sources in the CISF said a detailed SOP on its part has already been prepared for operation of the Metro service. This includes limiting the number of people allowed to gather on the platform, seating arrangements inside the Metro rake with social distancing, detailed protocols for queuing, varying level of protective gear for personnel depending on their location, staff circulation every half hour, minimal contact frisking, frequent sanitisation of metal detectors, thermal scanning of passengers and sanitiser dispensers at various locations.

“The challenge will be the Blue and Yellow lines which have maximum passenger load. But we are not expecting too many passengers initially. As the load increases, SOPs will be revised,” a CISF officer said.