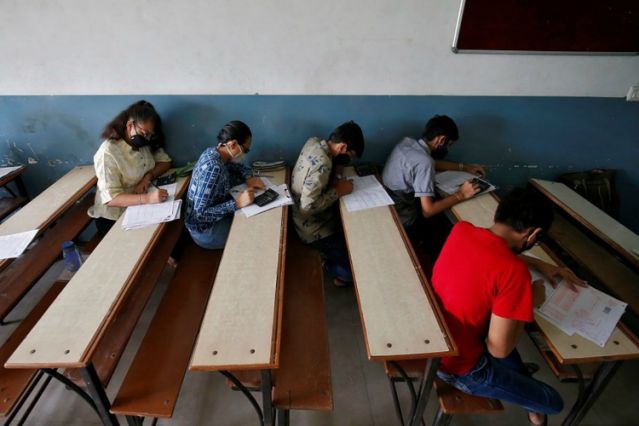 India’s COVID-19 caseload reached 32.34 lakh on Wednesday amid a growing clamour against the Centre’s decision to hold NEET and JEE (Main) exams as scheduled.

The chief minsiters of seven non-BJP ruled states held a virtual meeting on Wednesday, asserting that the  national level entrance exams could put lakhs of students across India at the risk of contracting the virus.

In the meeting called by Congress interim president Sonia Gandhi, the chief ministers of the seven non-BJP ruled states agreed to file a review petition urging the Supreme Court to reconsider its recent order rejecting the postponement of the competitive exams.

The AAP and the DMK too have supported the demand to postpone the NEET and JEE (Main), with Delhi deputy chief minister Manish Sisodia asking the Central government to work out alternative methods for selecting students.

Some states on Wednesday also announced measures like cancellation or postponement of state level exams and to keep educational institutions shut in light of the coronavirus pandemic.

In Maharashtra, which recorded its highest single-day surge of 14,888 new infections, the state Cabinet decided to postpone all examinations of the state Public Service Commission. A revised scheduled will be shared at a later date, said Chief Minister Uddhav Thackeray.

In Odisha, which has reported 87,602 cases of the novel coronavirus infection so far, Chief Minister Naveen Patnaik announced that educational institutions will remain closed till the end of the Durga Puja vacation.

The five-day Durga Puja festival is slated to be held from 22 to 26 October.

Meanwhile, Tamil Nadu chief minister E Palaniswami said that except for final semester exams, all other examinations for undergraduate and postgraduate students are cancelled.

However, in BJP-ruled Karnataka, deputy chief minister and higher education minister CN Ashwath Narayan said that the government has given the go-ahead for colleges to resume from 1 October, adding that guidelines in this regard were awaited from the Centre. Online classes would begin next month, the minister said.

Educational institutions across the country have remained shut since a lockdown to contain the spread of the viral infection was imposed in March.

Meanwhile, the Congress announced protests by its state units on 28 August in front of Central Government offices at state and district headquarters, besides a nationwide online campaign, #SpeakUpForStudentSaftey.

India’s cumulative case count rose to 32.34 lakh on Wednesday with 67,151 more people testing positive for the infection, while the recoveries surged to 24,67,758, said the health ministry its morning update. The toll from the virus climbed to 59,449 with 1,059 more fatalities.

The recovery rate rose to 76.30 percent with 63,173 more people recuperating from the disease in the 24 hours ending 8 am on Wednesday. The case fatality rate now stands at 1.84 percent, the ministry said.

Meanwhile, Phase II clinical trial of the Oxford COVID-19 vaccine ‘Covishield’ , being manufactured by the Pune-based Serum Institute of India (SII), began at the city’s Bharti Vidyapeeth’s Medical College and Hospital, where at least two volunteers were administered doses of the vaccine.

“Doctors at the hospital administered the first shot of the ‘Covishield’ vaccine to a 32-year-old man after his reports of COVID-19 and antibodies tests came out negative,” Medical Director of Bharti Vidyapeeth’s Medical College, Hospital and Research Centre, Dr Sanjay Lalwani, said, adding that another 48-year-old male volunteer was also given the vaccine.

According to Dr Lalwani, a total of 25 candidates will be given the vaccine in the next seven days.

With several states reporting new cases and fatalities, some state governments announced steps to allay the concerns of students and their parents.

Odisha, which registered its highest single-day spurt of 3,371 new cases on Wednesday, decided that all educational institutions in the state would remain closed till the Durga Puja vacations. The state government also announced that school syllabus up to class 12 will be reduced by 30 percent for the current academic session.

The fresh infections have pushed the number of active cases in the state to 27,638, while the toll has reached 441.

Maharashtra reported its single-day highest spike of 14,888 coronavirus cases which took the case count to 7,18,711. The toll in the state due to the virus reached 23,089 with the addition of 295 fatalities.

Pune city reported 1,640 new cases along with 37 deaths. State Chief Secretary Sanjay Kumar said that all the MPSC exams were being put off due to the COVID-19situation in the state.

In a significant decision for the transport sector hit hard by the lockdown, the government has decided to waive vehicle tax on public transport and goods vehicles, said the CMO. The waiver will be effective for the period between 1 April, 2020 and 30 September, 2020.

Karnataka Deputy Chief Minister Dr CN Ashwath Narayan final year examinations will be scheduled for all the undergraduate, diploma and engineering students alongside the commencement of classes, adding that arrear exams will also be held.

“The government has decided to get the ball rolling on all academic activities online from next month. In addition, all colleges will start in October and students are expected to attend classes in person,” he said.

In Tamil Nadu,  Chief Minister E Palaniswami said that except the final semester exams, students who have paid fees for subjects related to other semesters and waiting for exams shall be exempted from taking the examinations and they would be awarded marks. Palaniswami said he has directed the Higher Education Department to issue a detailed Government Order on the matter.

In Delhi, Chief Minister Arvind Kejriwal said COVID-19 tests will be doubled to 40,000 per day within a week since there has been a “marginal” increase in the number of coronavirus cases in the city.

The list of politicians testing positive continued to grow on Wednesday.

Punjab chief minister Amarinder Singh said that 23 MLAs and ministers are coronavirus positive with just two days to go before the state Assembly Session. Three among the 23 MLAs are Cabinet ministers.

“If this is the state of the legislators and ministers, one can only imagine how grave the situation on the ground is,” he said, while registering his opposition to the exams being held in September.

Former Assam chief minister Tarun Gogoi said on Wednesday that he has been diagnosed with COVID-19. The veteran Congress leader urged all those who came in contact with him recently to get tested. Gogoi, who represents the Titabor Assembly constituency in Jorhat district, is the 13th Assam legislator to be diagnosed with COVID-19.

His former cabinet colleague Ajanta Neog, the MLA from Golaghat, tested COVID-positive on Tuesday and was admitted to the Gauhati Medical College and Hospital.

Another former Congress minister and legislator from Samaguri constituency in Nagaon, Rakibul Hussain, and his wife had earlier tested COVID-positive.

Gogoi, who has initially advised home isolation, was admitted to Gauhati Medical College and Hospital (GMCH) on Wednesday night.

Minister for Health and Family Welfare Himanta Biswa Sarma said that a nine-member committee under the chairmanship of the head of Pulmonary Medicine department Dr Jogesh Sarma has been constituted to monitor the health status of the former chief minister.