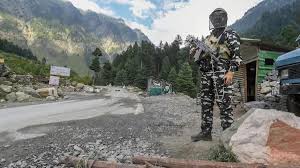 Days after Indian troops thwarted Chinese manoeuvres and occupied strategic heights on the south bank of Pangong Tso and Rechin La near Rezang La, the south bank of the lake appeared to be on the boil again late Monday night with the Chinese PLA claiming that Indian troops had fired warning shots, prompting it to “take countermeasures to stabilize the situation on the ground”.

There was no immediate response from the Indian Army or the Ministry of Defence.

In a statement, Colonel Zhang Shuili, spokesperson for the PLA Western Theatre Command, claimed the Indian Army “crossed the line and entered Bangong Hunan, the western section of the Sino-Indian border” and the “Indian actions seriously violated the relevant agreements and agreements between China and India, pushing up regional tensions, and easily causing misunderstandings and misjudgments”

Exactly a week ago, Indian troops occupied strategic heights on the south bank of Pangong Tso and Rechin La, giving them a commanding view of the terrain in the Chushul sector. Troops can keep an eye on China’s Moldo garrison and prevent any attempt to ingress via the Spanggur Gap.

On September 4, Army chief General MM Naravane, while reviewing operational preparedness in eastern Ladakh, said the situation along the Line of Actual Control was “tense”.

He said Indian actions had only been along the LAC – this was his way of countering Chinese allegations that Indian troops crossed the LAC, a charge the PLA repeated Monday night.

With the occupation of these heights, the Indians hope to make the Chinese return to the disengagement talks table. The PLA has been reluctant to step back from the north bank of Pangong Tso and Gogra Post after agreeing to total disengagement.