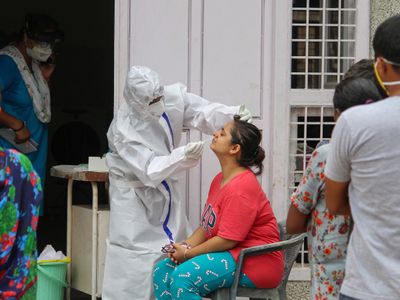 NEW DELHI : The total tally of Covid-19 cases neared the 60 lakh-mark and death toll touched 94,000 on Saturday. A total of 85,362 new cases have been reported in the last 24 hours in the country, according to the Union Health Ministry. 75% of the new confirmed cases are found concentrated in 10 States/UTs.

Maharashtra continues to top this list. It has alone contributed to over 17,000 followed by Karnataka and Andhra Pradesh with more than 8,000 and 7,000 cases, respectively, the union health ministry said.

As on 26 September, active caseload accounts for 16.28% of the total positive cases.

According to the health ministry data, 1,089 deaths have been registered in the past 24 hours. 10 States/UTs account for 83% of the deaths in the last 24 hours due to Covid-19.

Maharashtra reported 416 deaths followed by Karnataka and Uttar Pradesh with 86 and 84 deaths, respectively, the government said.

India has substantially ramped up its testing infrastructure across the country. So far, there are 1,823 labs including 1,086 government and 737 private labs.

India’s testing capacities have surged to 14 lakh per day. According to the health ministry data, 13,41,535 tests were conducted in the past 24 hours. The total number of tests has crossed 7 crore on Saturday.

The national cumulative Positivity Rate is 8.40% and the Tests Per Million is presently positioned at 50,920, the government said.

India has recorded 93,420 new recoveries in the last 24 hours. With this, the total number of recoveries are 48,49,584, the government said in a statement.

With the increase in daily recoveries, the Recovery Rate has also sustained its upward trend. It currently is positioned at 82.14% today.

Meanwhile, eSanjeevani OPD platform of Ministry of Health and Family Welfare has completed the landmark milestone of 4 lakh tele-consultations. The top performing States, Tamil Nadu and Uttar Pradesh have logged in 1,33167 and 1,00124 sessions, respectively, the government said.

The other States that have registered highest consultations through eSanjeevani and eSanjeevani OPD platforms are Himachal Pradesh (36,527), Kerala (33,340), Andhra Pradesh (31,034), Uttarakhand (11,526), Gujarat (8914), Madhya Pradesh (8904), Karnataka (7684), Maharashtra (7103). The usage trend shows that there has been a quick uptake of this service in smaller districts like Villupuram in Tamil Nadu. Over 16,000 consultations have been recorded from Villupuram, which is the topmost district in terms of tele-consultation services availed of by the beneficiaries.

Nationally eSanjeevani platform is being used by 26 States and over 12,000 practitioners of various State Government health departments have been on-boarded on eSanjeevani and their services have been sought by people from 510 districts of the country.