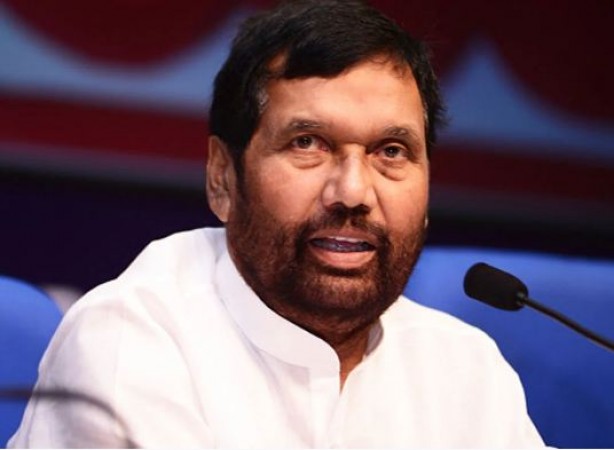 NEW DELHI: The national flag will be flown at half-mast on Friday (October 9) in Delhi and capitals of all states and Union Territories as a mark of respect to Union Minister Ram Vilas Paswan who passed away  on Thursday, the Union Ministry of Home Affairs (MHA) announced. A state funeral will also be accorded to the union minister.

A meeting of the Union Cabinet has been convened on Friday to express condolences over the minister’s demise, officials said.

Paswan had long suffered from a heart condition. The Lok Janshakti Party founder and Minister for Consumer Affairs, Food and Public Distribution was admitted to a private hospital here for several weeks and had recently undergone a heart operation. His condition deteriorated over the past 24 hours and he breathed his last at 6.05 pm, Fortis Escorts Heart Institute said in a statement.

LJP sources told PTI that Paswan’s body will be brought to his Janpath residence in New Delhi on Friday and then flown to the party’s office in Patna in afternoon. Cremation will take place in Patna on Saturday.

Always at the forefront of raising issues concerning the disadvantaged sections of society, Paswan was also a skilful grassroots politician who enjoyed good equations with leaders across the spectrum, and his dedicated following in his home state of Bihar ensured that every national party courted him in his over five decades of career.

His demise could not have come at a more inopportune time for his 37-year-old son Chirag Paswan who is now leading the party his father founded in 2000 to a crucial Assembly polls in Bihar, beginning October 28. “Papa, you are no more in this world but I know you are with me wherever you are. Miss you papa,” Chirag Paswan tweeted.

No longer in the ruling National Democratic Alliance in Bihar, Chirag Paswan is taking on Chief Minister Nitish Kumar’s JD(U) as well as the RJD-Congress-Left opposition alliance in the assembly polls and will miss out on his father’s experience of deftly navigating several such crises in the past.

Reactions from the political fraternity had pouring condolences for Paswan and termed his demise as a great loss for Indian politics and country.

Condoling his demise, President Ram Nath Kovind said, “In the demise of Union Minister Ram Vilas Paswan, the nation has lost a visionary leader. He was among the most active and longest-serving members of parliament. He was the voice of the oppressed, and championed the cause of the marginalized. “A firebrand socialist in youth, mentored by the likes of Jayaprakash Narayan during anti-Emergency movement, Paswan ji had enviable rapport with masses and he ardently strove for their welfare. Condolences to his family and supporters,” Kovind said in another tweet.

Expressing grief at Paswan’s demise, Prime Minister Narendra Modi said he was saddened beyond words as his death has left a void in the nation that will perhaps never be filled. “Shri Ram Vilas Paswan Ji’s demise is a personal loss. I have lost a friend, valued colleague and someone who was extremely passionate to ensure every poor person leads a life of dignity,” Modi said in his condolence message.

The prime minister also said Paswan “rose in politics through hardwork and determination. As a young leader, he resisted tyranny and the assault on our democracy during the Emergency. He was an outstanding Parliamentarian and Minister, making lasting contributions in several policy areas.”

“Working together, shoulder to shoulder with Paswan Ji has been an incredible experience. His interventions during Cabinet Meetings were insightful. From political wisdom, statesmanship to governance issues, he was brilliant. Condolences to his family and supporters. Om Shanti,” Modi said in another tweet.

Born in Khagaria in 1946, Paswan was selected as a police official but chose the calling of politics and became an MLA for the first time in 1969 on a Samyukta Socialist Party ticket.

He was elected to Lok Sabha eight times and also held the record of winning his constituency, Hajipur, with the highest margin for several years.

He was a minister in central governments headed by parties of contrasting ideological persuasions, ranging from the Janata Dal to the Congress and the BJP, since 1989.

Whoever might be his ally, he took pride in describing himself as a socialist and secular politician by conviction.