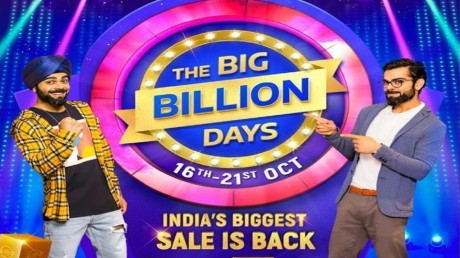 The Flipkart Big Billion Days sale will go live at 12 PM today. The official sale date is October 16 but the sale starts a day early for the Flipkart Plus members from October 15. Amazon is also hosting its Great Indian Shopping Festival from October 17 but the Prime users can access the deals from October 16. While the Flipkart sale will conclude in six days, Amazon will host a month-long sale for the first time ever.

Flipkart had given the option to customers to pre-book their products at only Rs 1, the balance can be paid on October 16 when the sale officially commences. SBI credit and debit cards holder will get an instant discount of 10 percent during the Flipkart sale. The company will also offer no-cost EMI options to users, cashback and much more during the sale. So here is looking at some of the deals

Flipkart is offering a host of discounts on Samsung, Realme, Redmi, Poco, Vivo, and Motorola phones. So if you have been planning to buy a smartphone this is the best time for it.

Nokia and Flipkart would be selling six new television in different sizes. Thomson too has announced that during the sale, it would sell its TVs starting from Rs 5999.