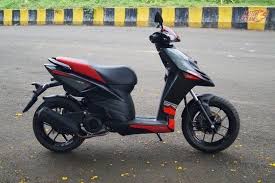 The Aprilia SR160 is big on everything – price tag, engine, performance on any Indian scooter. How impressive is all of this as a package is what we explore in this review

In a scooter, you rarely get a purpose-built one. Scooters are always multi-purpose, especially in a country like India where you can always see a gas cylinder and two kids on one. Scooters inarguably are the ultimate ones as far as convenience goes. However, in 2016, Aprilia took this notion, spun it around the head and created a tool that will be the happiest on a track (go-kart). The Aprilia SR150 wowed everyone and every portal or journalist worth his/her salt will tell you how good the scooter is to ride. Convenience though featured no where on the list and SR150 was as impressive as a sportsbike – performance being the talking point. Come 2020 and Aprilia has a bigger engine for the SR150 and it is now badged SR160. We reviewed the scooter in Mumbai to see if there are more convenience bits added or not.

The Aprilia SR160’s engine base is essentially the same unit as before. However, now the stroke has been increased by 2mm and with this, the displacement has gone up from 154.88cc to 160.03cc. Aprilia India did this to ensure that with the new BS6 emissions coming in, the scooter’s performance USP doesn’t go away. To this effect, there is a power as well as torque increase – 10.8hp and 11.6Nm as opposed to the 10 and 10.9 figures earlier, respectively. Start the motor and you realise that the fuel-injecte engine sounds smoother than before. It also has reduced vibrations, the effect of which can be noticed on the instrument console as well as the mirrors.

Accelerate and you realise that the scooter now has a linear power delivery. Gone is the strong surge of acceleration which used to make the BS4 unit scurry off the line. This being said, you realise that the acceleration is pretty strong till 60kmph. After this, it begins to taper but the engine pulls and manages to nudge a speedo indicated 95kmph. This was before it ran out of road. We believe, a bit more open road and it may have crossed 100kmph. The engine while doing all this doesn’t sound stressed at all and that is a good thing. BS6 has brought in – refinement.

Weight has a major role to play in the scooter’s performance. It is the country’s highest-capacity scooter and weighs in at 122kg. The other three-valve engined scooter, the TVS Ntorq, is a 125cc unit and weighs 118kg. We think if the Aprilia SR160 was stripped of its already bare body parts, the result will be a faster accelerating scooter. Food for thought, eh future owners!

The SR160 gave us a fuel economy of 38kmpl in the city and 41kmpl on the highway. The digital fuel gauge, as is usually the case with such units, was a bit erratic. It will display less fuel even when the tank was brimmed. If you are talking of the exhaust note, then it does sound sporty but the Ntorq has a far throatier track.

One of the most accomplished handlers, the SR160, carries over its cycle parts from the 150. This means 14-inch alloy wheels (shod with MRF as opposed to Vee Rubber), a 220mm disc brake at the front as well as side-mounted monoshock at the rear. All this comes together to allow the Aprilia SR160 lean angles which may not be possible with any of its peers right now. The straight-line stability too is excellent. It is only that taller riders will not be comfortable as the handlebar will brush against their knees while cornering. The pillion seat, from our previous experience, was decent for short distances. The rider seat is something wherein which we started squirming after putting in a few kilometres.

Ride quality wise, the scooter is stiff. Remember, this was designed for performance and a stiffer suspension aids the handling. However, some time back Aprilia had chosen to go with a slightly softer front end and it shows. The scooter doesn’t crash over every pothole you encounter but lets you know through the handlebar about the aberration. We enjoyed a throttle open approach over broken roads, with the 14-inch wheels playing a supporting part here.

We liked the brakes though it must be said the front unit felt a bit wooden in its approach. The rear drum unit works just fine and brings this zesty scooter to a halt where you intend it to. Having the ABS safety dragnet, though only on the front wheel, also helps immensely. This ABS unit, like in the Hero bikes, was observed to start flickering at speeds as low as 5-10kmph with no front brake application. Guess, its a part of the single-channel ABS ecosystem or Hero and Aprilia have the same ABS unit supplier.

Ground clearance, even with a pillion is generous and never touched any speedbreakers.

The Aprilia SR160 looks nearly the same as the SR150 and the latter wasn’t a bad looker. It seems very purpose-built but the 160 now has a single-barrel halogen headlamp as opposed to the dual units on the BS4. There are new graphics as well. There are fewer storage spaces, with just one hook on the inner apron, a UBS port under the seat as well as place to fit in a small ISI helmet. Aprilia doesn’t have an integrated key switch which means one needs to not only get off the scooter to fill fuel but also open it for the pump attendant. Frustrating indeed.

The meter console is still semi-digital. The digital part has very little information to display and boasts two trip meters, and the fuel gauge as well as ABS and engine malfunction lights. We wish Aprilia could have given more here as well as put some attention to the switchgear. The pass light is integrated with the high as well as low beams. Light from the halogen headlamp is quite passe.

At Rs 1.04 lakh ex-showroom, the Aprilia SR160 will not be the brainiest decisions of your life. It will obviously be a choice of the heart here. The scooter serves its performance intentions very well but apart from that it offers far lower value than something like a Suzuki Burgman Street or even the Honda Activa 125. Aprilia knows this and aims to fix it with the SXR160 – a Burgman-styled scooter that is launching next month. For now, buyers will have to be content with the Aprilia SR160 if they seek pure performance and those Italian flashy looks. The last two are very hard to come by in the current crop of scooters in India.