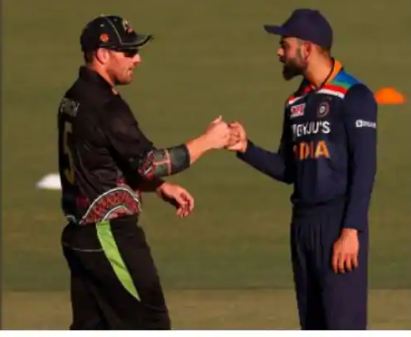 Former India batting coach Sanjay Bangar has said that India should field Mayank Agarwal as the second opener with Shikhar Dhawan when they take the field against Australia in Sydney. India are 1-0 up in 3-match series and a win seal the deal.

“It’s going to be a toss-up right because Rohit Sharma, unfortunately, isn’t available for the team, so I believe they will have to go with Mayank Agarwal and Shikhar Dhawan. Shikhar Dhawan is going to be a consistent factor, but whether they opt to go with KL Rahul, who has again been in fabulous touch, is something that needs to be seen,” Sanjay Bangar said on the show Gameplan on Star Sports.

Bangar said he might just tilt in Agarwal’s favour as he has shown some good form in the IPL. “KL Rahul has done great service to the Indian team in the recent past when he’s batted at No. 5, but I believe that Mayank Agarwal may just open with Shikhar Dhawan,” Bangar added. India might have been losing ODIs, but there T20 form has been superb. They haven’t lost a series since February 2019 and with the World T20 coming next year, the men in blue wouldn’t want to lose their form.