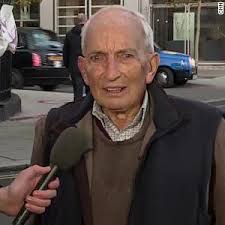 After that, Kenyon said the process was rather simple as after a ‘nasty lunch’, they gave him the vaccine. He also added nonchalantly how the jab didn’t hurt at all and he didn’t even realise the needle had gone in until it came out.

As the world kept track of every little nugget of information on Britain’s historic Pfizer vaccine rollout on Tuesday, a 91-year-old pensioner from London became the internet’s collective favourite after he spoke about being late for his vaccine jab at the hospital due to not being able to find a place to park his vehicle.

Martin Kenyon, who became one of the first persons in the world to get a dose of the vaccine, gave an interview to CNN where he explained in detail how he was put on the list of the immunization programme after putting through a call to the hospital, the Daily Mail reported. Kenyon’s matter-of-fact demeanour while explaining about the vaccine jab endeared him to the viewers as he spoke how the experience was painless as he didn’t even realise when “the needle had gone in until it had come out.”

Kenyon’s interview with CNN anchor Cyril Vanier has now gone viral after he mentioned how he had a ‘rather nasty lunch’ before getting vaccinated. He also became internet’s favourite granddad when he said he hoped he won’t get the ‘bloody bug’ after this as “he has granddaughters and intended to live a long time to enjoy their lives.”

Kenyon got his vaccine at the Guy’s Hospital in Southwark, London and also spoke how he feels about being one of the first persons in the world to get the vaccine. He said he asked the hospital authorities about the way to go about it who put his name down in their list and told him to come down by 12:30pm. Kenyon then goes on to admit how he got a bit late for his vaccine because he “couldn’t find anywhere to damn well park his car”.

After that, Kenyon said the process was rather simple as after a ‘nasty lunch’, they gave him the vaccine. He also added nonchalantly how the jab didn’t hurt at all and he didn’t even realise the needle had gone in until it came out. He also goes on to correct the CNN anchor when he says that “we don’t have too many vaccinations anymore, it is inoculations now”.

Kenyon also wished to hug his grandkids over Christmas and he hoped the vaccination news would be a big surprise for his family who did not yet know about it.

Kenyon zest for living his life was hailed by the netizens after he said, “I don’t intend to have it [coronavirus]. Well, there’s no point in dying when I’ve lived this long is there. I don’t plan to, anyway.”

While Margaret Keenan, a 90-year-old grandmother became the first person in the world to receive the vaccine outside of a trial, following her to get his jab of the coveted vaccine was 81-year-old William Shakespeare.

Britain’s Medicines and Healthcare products Regulatory Agency (MHRA) granted emergency use approval to the Pfizer-BioNTech vaccine, which they say is 95% effective in preventing illness, in record time – just 23 days since Pfizer published the first data from its final stage clinical trial. Those over-80, care home workers and at-risk health and social care staff have been put in line first for the new vaccine. Initially 800,000 doses are being given in the upcoming days and Health Secretary Matt Hancock has promised millions before Christmas.