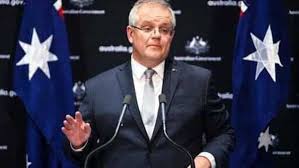 Australia has become the first country in the world to scrap a coronavirus vaccine project, after a shot developed as part of the $750 million scheme saw trial participants falsely test positive for HIV.

The University of Queensland and the Australian biotech firm CSL had been conducting clinical trials on a prototype vaccine with the backing of the Australian government and the Coalition for Epidemic Preparedness Innovations.

But at a press conference Friday, Prime Minister Scott Morrison announced that the projected was terminated.

“We can’t have any issues with confidence,” he said. “We are as a nation now, with a good portfolio of vaccines, able to make these decisions to best protect the Australian people.”

Several trial participants who were given a shot of the prototype vaccine had tested positive for HIV, despite not having that virus.

The trial vaccine had used parts of a protein found in HIV, which triggered antibodies commonly seen during HIV testing.

Despite the false positive HIV test results, the trial vaccine was showing promising signs in combating the coronavirus, the University of Queensland said in a Friday statement.

“The UQ-CSL v451 COVID-19 vaccine has shown that it elicits a robust response towards the virus and has a strong safety profile,” it said.

“However, following consultation with the Australian Government, CSL will not progress the vaccine candidate to Phase 2/3 clinical trials.”

“There is no possibility the vaccine causes [HIV] infection, and routine follow up tests confirmed there is no HIV virus present,” the university added.

As of Friday, Australia has recorded 28,012 cases of COVID-19 and 908 total deaths, Health Ministry data shows.