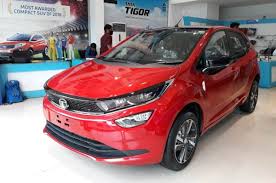 Tata Motors has dropped a teaser video of the Altroz premium hatchback saying “Your Santa Altroz” – “Coming Soon”. The new model will arrive near around the Christmas. However, there is no clarity whether it’s the new turbocharged petrol variant or a special edition. The carmaker has been testing the Tata Altroz turbo-petrol for quite sometime. The model will use a 1.2L turbocharged petrol motor that’s good enough for 110bhp and 140Nm of torque.

The new turbo variant will come with a 5-speed manual gearbox. If reports are to be believed, the carmaker might also introduce a new 7-speed dual-clutch automatic transmission sourced from Punch. While the gear shifter will be supplied from Lumax, some of its critical parts will be sourced from Schaeffler. Tata’s new DCT gearbox will also be offered on other model lineups in near future.

The carmaker claims that its new DCT gearbox will be “more sophisticated” than other existing AMT units. In fact, it said to be more affordable than the conventional DCT units or torque convertor transmissions. At present, the Tata Altroz comes with two engine options – 1.2L, naturally aspirated petrol and 1.5-litre, 4-cylinder turbocharged diesel. While the former delivers a top power of 85bhp at 6,000rpm and 113Nm at 3,300rpm, the latter makes power worth 89bhp at 4,000rpm and 200Nm of torque between 1,250-3,000rpm. All variants get a 5-speed manual transmission as standard.

In terms of design and features, the new Tata Altroz turbo petrol model will be exactly similar to the regular model. Though, it will have a special ‘iturbo’ badge on the black rear section. Currently, the premium hatchback lineup is available in five trims (XE, XM, XT, XZ and XZ (O)) – priced between Rs 5.44 lakh – Rs 8.95 lakh (all, ex-showroom). The company offers four optional packs – Rythm, Style, Luxe and Urban – that cost up to Rs 39,000 over the regular variants.