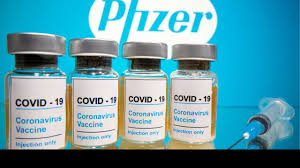 Vials with a sticker reading “COVID-19/coronavirus vaccine/Injection only” and a medical syringe in front of the Pfizer logo.

Chennai: The Indian government may not purchase Pfizer’s mRNA COVID-19 vaccine candidate for distribution in India, Business Standard has reported. The newspaper quoted unnamed government officials who said the issue is cost. Each dose of Pfizer’s new vaccine candidate is $37, or a little over Rs 2,700.

However, the report didn’t say if the government expects the price to drop given India’s large pool of potential buyers. The noted clinician and scientist Dr Gagandeep Kang had told The Wire last month that the country could expect Pfizer to lower the prize for India for this reason. Business Standard also reported that Pfizer has resolved to sell its vaccine solely via government contracts.

Pfizer developed its COVID-19 vaccine candidate along with the German company BioNTech. On November 9, it announced based on preliminary data from phase 3 clinical trials that the candidate was more than 90% efficacious. The regimen consists of two doses given three weeks apart.

Aside from its cost, the Pfizer vaccine candidate was also disfavoured from India’s point of view because of its storage demands. “The new two-shot vaccine from Pfizer has to be maintained at minus 80º C – nowhere on the planet does the logistical capacity exist to distribute vaccines at this temperature,” Toby Peters, a professor at the University of Birmingham, told Reuters last month.

Instead, as Dr Kang also noted, India may have more success with the vaccine candidate that AstraZeneca has been developing with the University of Oxford. It’s also a two-shot vaccine but is expected to be priced $3 a dose, and can be stored at temperatures compatible with India’s extant cold-chain network.

On the flip side, this candidate recently ran into trouble in India. The Serum Institute of India, Pune, has been sponsoring the candidate’s trials in India and has a deal with AstraZeneca to manufacture millions of doses as well as distribute them in India.

But last month, reports emerged that a participant of the phase 3 clinical trial had developed a serious adverse event that may or may not be related to the vaccine, and that Serum as well as the Indian Council of Medical Research had failed to disclose the incident to other trial participants.

“When there’s slowness, lack of upfront information and high-handed, angry responses, it usually means that something is being hidden, which is why they must have gone public,” noted epidemiologist T. Jacob John told The Wire Science last week. “It was only after the beans were spilled by the lawyer of the volunteer that people are now responding. That is not good.”

Business Standard also reported that the Drug Controller General of India’s subject expert committee has asked Pfizer to submit data that includes at least 1,600 Indians in the clinical trial cohort, in order to ascertain the vaccine’s purported efficacy in the Indian population.

Pfizer can either conduct bridge trials in India to this end or seek a waiver and petition the regulator to use foreign data instead. The company is reportedly leaning towards the second option.