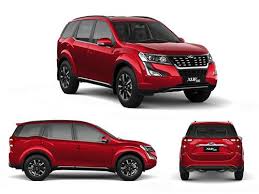 Seeing the growing demand for SUV body style, automakers are lining up more SUVs in the country. In this article, we bring you a list of upcoming new most awaited new SUVs launching in the country in the next 1 year –

The first product from Mahindra-Ford partnership will arrive in the second half of 2021. The company will showcase the SUV in the mid-2021, while launch expected in the end of 2021 or early 2022. The new model will be based on the new front-wheel-drive monocoque platform, which also underpins the new Mahindra XUV500.

The new Ford C-SUV will be offered with 2 engine options – a 2.0-litre, 4-cylinder, mStallion turbocharged petrol and a 2.2-litre turbocharged diesel. While the former is capable of producing 190bhp and 330Nm of torque, the diesel version churns out close to 180bhp and 400Nm of torque. Both manual and automatic versions will be on offer. Front-wheel-drive and all-wheel-drive system will be on offer.

Mahindra will introduce the new generation Mahindra XUV500 in the second quarter of 2021. The production version of the SUV is expected to be unveiled in the first quarter of 2021. The new model will come with all-new design and feature-loaded interior. The new Mahindra XUV500 will be the first vehicle in its category to offer Level 1 Autonomous Technology. There might also be several other advanced electronic features such as a 3D panoramic vision for driver, a radar system, autonomous braking system, an eyelid tracking mechanism and more.

Renault will present the Kiger compact SUV in the first quarter of 2021. The new Kiger will be based on the Renault-Nissan alliance’s CMF-A modular platform, which also underpins the Nissan Magnite and the Renault Triber. It will be offered with a 1.0L 3-cylinder petrol engine in naturally-aspirated and turbocharged versions. While the former is good for 72bhp and 96Nm of torque, the turbo engine offers 99bhp and 160Nm of torque. Transmission options will include a 5-speed manual and a CVT X-Tronic Automatic (1.0L Turbo Petrol).

Hyundai has started testing the new AX1 micro SUV in South Korea. Set to be Hyundai’s smallest & most affordable UV, the new AX1 will mainly target developing nations including India. he new Hyundai AX1 will be positioned against the Maruti Suzuki Ignis and the upcoming Tata HBX micro SUV. Likely to be based on the K1 platform, the upcoming Hyundai AX1 could be powered by a 1.2-litre 4-cylinder naturally-aspirated petrol engine. While powering the i10 Nios, this engine produces 82bhp and 114Nm of torque. The SUV could also receive the Santro’s 1.1L engine that offers 67bhp and 100Nm of torque. Transmission choices might include 5-speed manual and an AMT gearbox option.

The homegrown automaker will introduce the HBX concept based micro SUV in the second quarter of 2021. Likely to be called the Tata Hornbill, the micro SUV will rival the Maruti Ignis and the Mahindra KUV100 NXT. The upcoming Hornbill micro SUV is developed on the ALFA (Agile Light Flexible Advanced) platform, which also underpins the Altroz premium hatchback. The micro SUV will be powered by a 1.2-litre, 3-cylinder Revotron petrol engine that also powers the Tiago and the Altroz. This engine churns out 85bhp of power and 110Nm of torque. Transmission choices will include a 5-speed manual and an AMT.

The homegrown UV maker will introduce the new-gen Scorpio in the mid-2021. The new model will be based on the modified ladder-on-frame chassis, which also underpins the new Thar. The next-gen Scorpio will grow in size, which will help Mahindra to create more space inside the cabin. The SUV will be offered with 2 engine options – a 2.2-litre turbocharged diesel and a 2.0-litre turbocharged petrol.

The Tata Gravitas is a 6-seater version of the Harrier SUV and will be the brand’s flagship product in the country. Scheduled to be launched in January-March 2021, the new Gravitas will challenge the MG Hector Plus. In terms of proportions, the Gravitas is 63mm longer, 72mm wider and 80mm taller than the Harrier. The SUV will have a ground clearance of 200mm. Powering the Tata Gravitas is a 2.0-litre, 4-cylinder turbocharged diesel engine that also powers the Harrier. This Fiat-sourced engine is capable of producing 168bhp of power and 350Nm of torque. Transmission choices include a 6-speed manual and a Hyundai-sourced 6-speed torque convertor automatic.

Hyundai has started testing the 7-seater version of the Creta SUV, which is rumoured to be called the Alcazar. It will ride on 20mm longer wheelbase, while the length of the SUV will be raised by 30mm to accommodate third row of seats. The company would make certain changes to the styling and will utilise the 433-litres of boot space to create space for 3rd row of seats. The new Hyundai Creta 7 seater version is likely to be offered with two engine options – a 113bhp, 1.5-litre turbo-diesel and a 138bhp, 1.4-litre turbocharged petrol. Both manual and automatic gearbox options will be on offer.