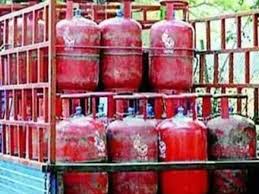 On Tuesday, oil companies hiked the price of LPG by Rs 50. This is the second increase in a fortnight.

Government-owned oil companies once again decided to increase the prices of LPG cylinders on Tuesday. As a result, customers will now have to shell out more money for cooking gas.

On Tuesday, oil companies hiked the price of LPG by Rs 50. This is the second increase in a fortnight.

Within two weeks, the price of LPG cylinder has been hiked by Rs 100. It has now become expensive for the common people to cook food in the kitchen and the domestic budget will also be affected.

The price of 19 kg commercial gas cylinder has also increased. It will now cost Rs 36 more. The rate of this cylinder in the national capital Delhi is Rs 1332.

What happens to LPG subsidy?

Under the subsidy scheme, Indian households are allowed a maximum of 12 LPG cylinders per year at subsidized rates. Cylinders have to be bought at full price at the time of purchase, and the subsidy is credited to the customer’s bank account by the government.

The government had eliminated cooking gas subsidies in September this year as a fall in oil prices and increase in cooking gas prices brought parity in the market and subsidized prices.

Now that the market prices are increasing again, it remains to be seen if the government increases subsidy benefits as well.

No change in petrol, diesel prices

Oil marketing companies, however, continued to hold back any change in the retail price of petrol and diesel continuing with their wait and watch stance that has kept the prices of two auto fuels static for the past 10 days.

Accordingly, there was no change in retail price of auto fuels on Thursday with price of petrol remaining at Rs 83.71 a litre and diesel Rs 73.87 a litre in Delhi.

Petrol price was very close to breaching the all time high level of Rs 84 a litre (reached on October 4, 2018) when it touched Rs 83.71 a litre on Monday last week. But the march has been halted ever since then with no price revision by the OMCs.

Earlier, the prices of petrol and diesel were hiked for six consecutive days. The hike on fuel prices started on November 20. During this time, the rate increased 17 times.