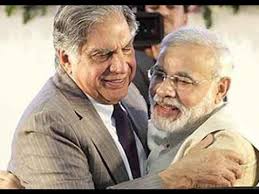 In all the years that I have been in business, I have been respectful of what our PM has been wanting to do, the leadership he has given us in the worst year of the pandemic, said Ratan Tata

New Delhi: One of the tallest leaders of India Inc, Ratan Tata has lauded the leadership of Prime minister Narendra Modi during the pandemic. Speaking at Industry body Assocham’s Foundation week, Ratan Tata, Chairman Tata Trusts said that the PM has not dithered and led the country from the front in a difficult period.

This is the second such endorsement for PMs policies during the pandemic. Asia’s richest man Mukesh Ambani also lauded Prime Minister Narendra Modi for his leadership during the COVID-19 pandemic less than a week ago. Tata said Modi’s efforts are not ‘cosmetic or showmanship.

“We should be most obliged for your leadership. Yes, there will be opposition, there will be discontent but there’s never been any dithering or running away. You got the lockdown, you wanted the country to shut down lights for a few minutes, you made that happen. It’s not cosmetic or showmanship. It is putting the country together and martial our efforts to doing what as a country we set ourselves to do,” Tata said.

Virus containment effort led to India’s economy contracting by record 23.9% in April-June, followed by a 7.5% contraction in the July-September quarter. The Indian government took a number of measures including massive liquidity support to enhance credit support to boost growth while increasing fiscal support to provide free food and employment for the poorest in the country.

The Modi government also embarked on a reform path during the period including pushing through labour reforms and agriculture reforms during the said period, while framing policies like production-linked incentives for over 10 sectors to make India self-reliant.

Tata said that Industry must now show the benefits of this leadership.

“It is now our job as an industry to show the benefits of this leadership, which I am confident that we will do. As I have seen India in the last few years, we do tremendous things when we unite ourselves together. Thank you for leading the country through this difficult period. If we all stand together and follow what you have said, do what you have done, the world will say, This Prime Minister said that it could happen and he made it happen” Tata said to Modi.