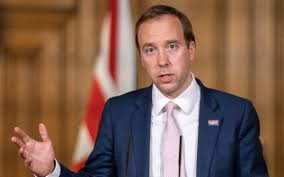 U.K. Health Secretary Matt Hancock warned that the new strain of the coronavirus is “out of control” and suggested parts of England will be stuck in the new, highest tier of restrictions until a vaccine is rolled out.

More than 16 million Britons are now required to stay at home after a lockdown came into force Sunday in London and southeast England and the government scrapped plans to relax rules on socializing at Christmas.

The government faced criticism for imposing an effective lockdown just days before Christmas, but Matt Hancock said the decision was taken speedily after new evidence showed the new strain was responsible for spiralling COVID-19 cases.

Announcing the measures, Prime Minister Boris Johnson abruptly tore up plans to allow three households to mix indoors for five days over the festive period, and imposed new Tier 4 level curbs – similar to a national lockdown in March – on London and southeast England.

Residents across the country were told to keep to their local areas, and extra police were being deployed at rail stations to stop people traveling out of London.

“Cases have absolutely rocketed, so we’ve got a long way to go,” Hancock told Sky News. “I think it will be very difficult to keep it under control until the vaccine has rolled out.” People in the new Tier 4 areas “should behave as though they have it,” he said.

Hancock said that as of Saturday morning 350,000 people had been vaccinated, with the ambition to reach 500,000 by the end of the weekend.

Johnson had originally planned to ease pandemic rules for five days during the holiday, but made an abrupt change of tack after emergency talks on the virus mutation with officials.

However, soon after UK PM announced the changes on Saturday afternoon, some in London headed for the capital’s train stations to try to travel to see relatives over Christmas, and there were scenes of crowding – something Hancock called “totally irresponsible”.

The new rules came into force on Sunday.

Transport minister Grant Shapps called on people under the new restrictions not to travel. More British Transport Police officers were being deployed to ensure that “only those who need to take essential journeys can travel safely”, he said in a statement.

With non-essential retail stores, as well as places like gyms and hair salons, ordered closed in the Tier 4 areas some businesses called the new measures a “real kick in the teeth”.

Hancock said the government recognisd that the economic impact of the new measures would be “severe” but that it had to weigh that against the health consequences.

Emerging scientific evidence suggests the new variant — which Hancock said has also appeared in Australia and continental Europe — can spread significantly more quickly than previous strains in circulation and is behind the surge in infections in recent days.

“We made the commitment not knowing that there was going to be a new variant that spreads so much faster,” Hancock said, of the original plans. He said there is “no evidence” that the new strain — VUI-202012/01 — is milder than the original virus.

Maria Van Kerkhove, Covid-19 technical lead at the World Health Organization, told the BBC’s Andrew Marr program: “We understand that the virus does not cause more severe disease.”

Videos shared on social media showed a dash for trains out of London on Saturday evening.

Transport Secretary Grant Shapps said in a statement that more transport police will be deployed to stop people taking unnecessary journeys out of the capital. Hancock said Shapps is examining compensation payments for canceled tickets.

The opposition Labour Party’s Lisa Nandy said the change of policy is “a perfect example” of Johnson “making a promise he knew he couldn’t keep about Christmas.”

“I think we have this ongoing drumbeat of dither from the government,” Nandy told Andrew Marr.

Charles Walker, a lawmaker from Johnson’s Conservative party, told the Sunday Telegraph newspaper that Hancock should resign. Another Tory MP, Mark Harper, who represents a caucus that opposes lockdown measures, urged the government to summon lawmakers from their vacation so a vote can be held on the toughened virus measures.

Hancock said a vote will happen in January.

Following the example of the Netherlands, where a ban on all UK passenger flights came into effect on Sunday, a German government source said Berlin, too, was considering a similar move as “a serious option” for flights from both Britain and South Africa.

The Dutch ban came into effect from 6:00 am (0500 GMT) and will last until January 1. And neighbouring Belgium also said it was suspending flight and train arrivals from Britain from midnight.

The World Health Organization is calling on its members in Europe to strengthen measures against coronavirus due to the new variant circulating in the United Kingdom, its European branch told AFP on Sunday.

Outside Britain, nine cases of the new strain have been reported in Denmark, as well as one case in the Netherlands and another in Australia, according to the WHO. “Across Europe, where transmission is intense and widespread, countries need to redouble their control and prevention approaches,” a spokeswoman for WHO Europe said.