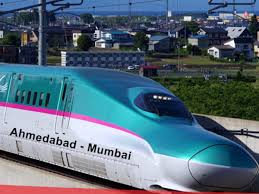 The Japanese embassy has released the first official photos of E5 Series Shinkansen, also known as Japan’s Bullet Train, which will be modified for use as rolling stock of the Mumbai-Ahmedabad High-Speed Rail project (MAHSR).

After the completion of this project, the distance between Mumbai and Ahmedabad will be completed in just 2 hours. The bullet train will run at an average speed of 320 km per hour with a maximum speed of 350 km per hour.

It is being executed by a special purpose vehicle namely National High-Speed Rail Corporation Limited (NHSRCL), with financial and technical assistance from the Government of Japan.

The MAHSR project was sanctioned for implementation with the technical and financial assistance of the Japanese government in December 2015.

The total estimated cost of the project is ₹1,08,000 crores.

The transportation infrastructure business of L&T Construction, the construction arm of Larsen & Toubro, secured the mega-contract from NHSRCL to construct 87.569 km of the MAHSR in November this year. L&T classifies contracts upwards of ₹7,000 crore in the mega category.

The scope of the MAHSR – C6 package includes the construction of viaducts, one station, major river bridges, maintenance depots, and other auxiliary works. This particular package represents 17.2% of the total length, running elevated from the outskirts of Vadodara to the outskirts of Ahmedabad with one station at Anand/Nadiad.

The Railway Board Chairman V K Yadav had said in September that 82% of the land for the bullet train project has been acquired in Gujarat, in Maharashtra land acquisition is only at 23%.

The NHSRCL has envisaged integration of passenger terminals of the bullet train with the Railways and Metro at Sabarmati and Ahmedabad.