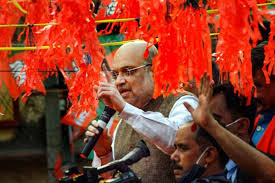 Amit Shah addressed a press briefing in Bolpur on Sunday where he spoke about government’s plan on framing rules on amended CAA.

NEW DELHI: Union Home Minister Amit Shah, who recently visited West Bengal to take stock of BJP’s poll campaign in the state ahead of the upcoming assembly elections, asserted that rules for the Citizenship (Amendment) Act are yet to be framed because of the pandemic and the matter will be considered once COVID-19 vaccination starts and coronavirus chain breaks.

“The rules of the CAA are yet to be framed as such a massive process could not be carried out because of the corona. As soon as (COVID) vaccination starts and corona cycle breaks, we will consider it,” Union Home Minister Amit Shah said while addressing a press conference.

Launching a scathing attack on Trinamool Congress supremo and Bengal Chief Minister, Shah claimed that Mamata Banerjee and her party raked up the ‘outsider- insider’ issue to divert public attention from the failures of the state government and said that a ‘son of the soil’ would lead the state if the BJP is voted to power.

Asked about the summoning of IPS officers of West Bengal cadre by the Ministry of Home Affairs, Shah said that the Centre has sent the letter to state government as per the Constitution and the law. “It is according to the federal structure (of the country). They (TMC government) should first go through the rules and then talk to the Centre and the public.”

The Centre had on December 17 shot off a fresh letter to the West Bengal government to immediately relieve its three IPS officers for central deputation, following which CM Mamata branded the move as ‘unconstitutional and unacceptable’.

On the attack on Nadda’s convoy by alleged TMC activists during his visit to Diamond Harbour on December 10, Union Minister Amit Shah alleged that political violence and corruption are at peak in the state.

“The BJP condemns it, and I too condemn it. The BJP believes that in a democracy, everyone should have the right to voice their views. And it is the responsibility of the ruling party to ensure that all parties can have their voice heard. The attack on the BJP chief is not only an attack on him. It is an attack on democracy in West Bengal and the Trinamool Congress is completely responsible for this,” Union Home Minister Shah said.