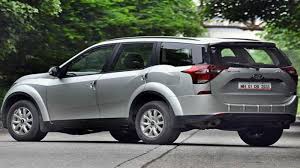 he long-awaited second generation Mahindra XUV500 will be unveiled in the first quarter of 2021, while launch is expected in April. The SUV has been caught testing numerous times; however, this time clear interior details have been revealed in the spy video.

The spotted model was equipped with a manual parking brake, which suggests that this could be the mid-spec variant. The SUV also has multi-functional steering wheel, leatherette seats, Mercedes-like instrument console, a large touchscreen infotainment system, silver finish around AC vents and fake wood finish on the steering.

The Spotted model also has central rear AC vents and 2 headrests. For people not in the know, the current car has rear AC vents on the B-pillars and 3 headrests in the second row. The second generation Mahindra XUV500 will also offer panoramic sunroof, which is also visible in the spy video. The video also shows the huge boot space with the third-row seats folded down.

The new Mahindra XUV500 will be based on the new front-wheel-drive monocoque platform, which will also underpins the upcoming Ford C-SUV. It will also receive Level 1 Autonomous Technology along with ADAS (Advanced Driver Assistance Systems). The driver assistance features include Autonomous Emergency Braking, Adaptive Cruise Control (ACC), Front Collision Warning (FCW), Lane Depature Warning (LDW) and Park Assist. The XUV500 will be the only product in its category to offer Advanced Driver Assistance System, as this system is not available in rivals like the Tata Harrier, the MG Hector and the Jeep Compass.

The next-gen Mahindra XUV500 will be powered by the 2.0-litre turbocharged petrol engine that also powers the new Thar; however, this unit will offer power up to 190bhp. The SUV will also receive the BSVI compliant turbodiesel engine with expected power output of 180bhp.

Mahindra will also launch the next generation Scorpio SUV in the second quarter of 2021. The new model will be based on the modified version of the ladder-on-frame chassis. It will also be offered with the new turbocharged petrol and diesel engines.