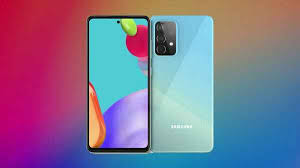 Some leaked Samsung Galaxy A52 5G renders from earlier tell us that the smartphone will look similar to its predecessor, complete with a rectangular camera cutout, a hole-punch selfie camera, USB Type-C charging port, and 3.5mm headphone jack. The handset is also expected to come with a glasstic finish to offer a slightly premium feel. To recall, the Samsung Galaxy A51 camera layout consisted of a 48MP sensor, a 12MP ultra-wide-angle lens, a 5MP macro lens, and a 5MP depth sensor. It is unclear at the moment if Samsung is opting for a similar setup on the Galaxy A52 5G.

Other rumoured Samsung Galaxy A52 5G specs include a Qualcomm Snapdragon 750G chipset paired with Adreno 619 GPU and 6GB RAM. The phone could also reuse the Galaxy A51’s 6.5-inch Super AMOLED display. One can only hope that Samsung bumps up its refresh rate to keep up with similarly-specced offerings such as the recently announced Xiaomi Mi 10i. There is no word about the Samsung Galaxy A52 5G release date just yet. It shouldn’t be too long before Samsung unveils the phone as is has shown up on quite a few certification websites.