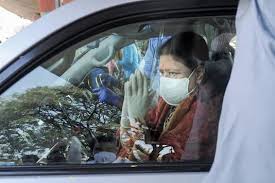 The challenge of VK Sasikala staking claim to the legacy of J Jayalalithaa is keeping the AIADMK on its toes. Things could get standoffish on Wednesday, the day of the AIADMK icon’s 73rd birth anniversary.

The stand-off between the current top order of the AIADMK and VK Sasikala is likely to intensify in the coming days. The 73rd birth anniversary of J Jayalalithaa on Wednesday could well be the open manifestation of the power tussle playing out silently through subtle manoeuvrings.

Both camps will try to stake claim to Jayalalithaa’s legacy. AIADMK’s chief ministerial candidate Edappadi K Palaniswami is set to hold a public meeting at TTV Dinakaran’s constituency — RK Nagar — which was also the constituency that Amma, as Jayalalithaa is reverently referred to, contested and won from last.

This move by EPS is to send across a message to the Sasikala camp that he is Jayalalithaa’s true successor.

Meanwhile, Sasikala, who made a grand entry into Chennai after she was released from Bengaluru prison, will pay floral tributes to the portrait of Jayalalithaa on Wednesday. This, however, is expected to take place in a residence associated with Sasikala and not J Jayalalithaa, whose home in the upmarket Poes Garden area has been turned into a memorial.

Sources close to Sasikala say that she will visit the Jaya memorial only after it is opened for public visits. Sasikala made it clear that she will partake in active politics and will redeem the AIADMK. However, her political plans will be unveiled only after February 24, a source said.

Meanwhile, Sasikala’s nephew TTV Dinakaran will hold a public meeting in Tambaram on Jaya’s birth anniversary and his party AMMK will hold its general council meeting a day later. Sasikala will not be part of this as her motive is to stake claim to Jaya’s legacy and head the AIADMK.

Her first step is to reclaim her post as the General Secretary of the party. She has moved a city court to fight the case and the hearing of the case is scheduled for March 15.

The AIADMK may project a steely exterior but the party remains nervous. Sasikala has remained silent ever since she returned to Chennai but her presence in Chennai was enough for the party to shut the Amma memorial along the Marina.

The AIADMK has, time and again, urged cadre to stay united for 2021 state assembly polls. On Monday, the AIADMK’s leading duo reiterated their call to stand guard, adding that betrayers (Sasikala and TTV Dinakaran) have joined hands with enemies (DMK) to defeat the AIADMK.