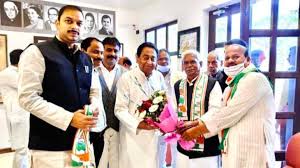 Babulal Chaurasia joined the Congress in the presence of Kamal Nath, and Gwalior MLA Pravin Pathak.

Chaurasia is affiliated to Hindu Mahasabha, an organisation Godse was a member of. He has won as a corporator in Gwalior. Civic polls are due in Madhya Pradesh in couple of months and the grand old party is busy strengthening its roots in the state.

However, as a seasoned politician, Chaurasia was quick to alter his political stance after joining Congress. He claimed that he was an old Congressman. Chaurasia was in Congress but had joined the Hindu Mahasabha after he was denied ticket in last civic polls.

He added that the Hindu Mahasabha kept him in the dark to make him support them and when he realised that he was with “wrong men”, he decided to join Congress party.

ANI quoted him as saying, “I am a Congressman by birth. I left the party after I was denied the party ticket to municipal corporation elections. I had joined Hindu Mahasabha, contested and won the election. Later, I realised that I don’t fit into their ideology.”

The Congress has been a harsh critic of the Hindu Mahasabha, especially over its support for Godse.

The radical outfit had tried installing a Godse temple and kept worshipping him for the past few years. Recently the Mahasabha had opened Godse Gyanshala, a library dedicated to Godse’s life. It was closed down by the Shivraj Chouhan government after a huge outcry by the Congress.

“Godse ka pujari, ab Congress ki savari (A Godse devotee is now a Congress member),” said Mishra adding this exposes the Congress party characteristic. “Gandhi for them are only Rajiv, Sonia and Rahul Gandhi. People like Mahatma Gandhi, Dr Bhim Rao Ambedkar and Sardar Patel are limited for them for vote bank,” he said.

He claimed that no one from the Gandhi family is yet to visit Statue of Unity which is dedicated to Sardar Vallabhbhai Patel.

Jaiveer Bharadwaj, senior functionary from Hindu Mahasabha in Gwalior slammed MPCC chief Kamal Nath saying Nath had made great hue and cry when Godse statue was installed in Gwalior in 2017 and now he is extending membership to a man involved in all those events and functions on Mahasabha.

“Congress has run out of workers so they are forced to borrow them from other organisations,” added Bharadwaj.