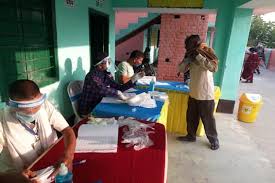 While the polls in West Bengal and Assam will be held in eight and three phases respectively, Tamil Nadu, Kerala and Puducherry will witness single-phase polling.

The first phase of polling in West Bengal will be on March 27, the second phase on April 1, the third phase on April 6 and the fourth on April 10. The fifth, sixth, seventh and eighth phases will be held on April 17, April 22, April 26 and April 29, respectively.

The single-phase voting for assembly elections in Puducherry, Tamil Nadu and Kerala will be held on April 6. In Assam, the polls will be conducted in three phases on March 27, April 1 and April 6.

Nearly 18.68 crore people will vote across 2.7 lakh polling stations for 824 seats across the four states and one union territory.

Chief Election Commissioner Sunil Arora said everyone on election duty for the upcoming polls will be vaccinated against COVID-19 before polling day. Arrangements will be put in place for candidates to file their nominations online for the five assembly polls. Voting will be allowed for an additional hour, keeping in mind COVID-19 safety guidelines, he said.

Arora said adequate paramilitary forces will be deployed across the states to ensure free and fair polling. “We have identified all critical and vulnerable polling stations where adequate number of CAPFs will be deployed. The Model Code of Conduct (MCC) will come into force immediately after the announcement of the election dates.”

Questioning the eight-phase assembly elections in Bengal, Chief Minister Mamata Banerjee said she suspects the dates were announced as per the suggestions of Prime Minister Narendra Modi and Home Minister Amit Shah for better management of the BJP’s poll campaign. Addressing a press conference at her residence in Kalighat, Banerjee said the EC should not look at the state ”through the eyes of the saffron camp” — a reference to the BJP.

The EC will appoint two special observers for Bengal and a third can also be sent if required, Arora said in response to queries on whether enough arrangements are in place for the polls in the state where many have been raising questions about political violence.

Responding to questions on the increased number of phases in Bengal, Arora said when the EC assesses the law and order situation, it is based on several factors. “After all the elections to West Bengal (assembly) in 2016 was in seven phases. The Lok Sabha was in seven phases. So, seven to eight (phases) is not such a big deal because we also have to see the movement of forces, we also have to see the current charges and counter-charges (by political parties),” he said.

“We have to kind of find a way out. That is why we are sending two expenditure observers to Tamil Nadu and two police observers to West Bengal,” he explained.

Arora said the EC has requested the Ministry of Home Affairs to provide two or three BSF helicopters so that the observers can visit various places for spot checks. The helicopters would be utilised for all the four states and Puducherry.

On Assam, Arora said the number of phases has been increased from two to three keeping in mind the security scenario. Responding to questions on Tamil Nadu and efforts to curb the influence of back money, Arora said the state is “expenditure sensitive”. He recalled that polls to Vellor constituency and RK Nagar seat had to be rescinded.

The EC held a meeting on Wednesday to finalise the dates of the upcoming Assembly elections in these states and the union territory. This is the first major set of elections to be held in the middle of the coronavirus pandemic after the Bihar election.

Of the five assembly elections, Bengal will be the most high-stakes battle between chief minister Mamata Banerjee’s TMC and the BJP, which has been making inroads into the state, and has already started a high-pitched campaign, inducting several Trinamool Congress leaders to its state unit to dislodge Banerjee. The BJP is also campaigning aggressively to retain power in Assam, where it won for the first time in 2016, beating the Congress.

In Tamil Nadu, the battle will be between the two mainstays of the state’s politics – the ruling AIADMK and the DMK – while Sasikala and Kamal Haasan may be the X-factor, in the first election without the state’s iconic leaders Jayalalithaa and Karunanidhi. In Puducherry, President’s Rule has been imposed and the assembly kept under suspended animation after the V Narayanasamy-led Congress government resigned earlier this week ahead of a vote of confidence. The Congress had only won in the UT in the last round of polls in these states in 2016 but lost power after a string of resignations.