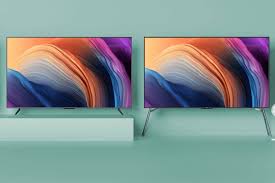 Xiaomi is looking to capture 40 percent market share with the help of its Redmi TVs.

The stupendous success of Mi TVs has—finally—propelled Xiaomi to launch its more affordable Redmi TVs in India. The forthcoming launch was briefly teased during today’s Redmi Note 10 series keynote event though keeping more granular details including timeline and product strategy strictly under the wraps. Financial Express Online decided to catch up with category lead for smart TVs at Xiaomi India, Eshwar Nilakantan, to understand the Redmi TV India roadmap, more importantly, to get a little more information about what’s coming and, when it’s coming.

Nilakantan did not reveal a lot of ‘specific’ information on the ‘what’s coming’ bit, but he did confirm the launch is planned within this month itself—so we would not have to wait for long to find out.

The Redmi TV broke cover—in China—last year and soon spawned multiple models including some (available in 98- and 86-inch screen sizes) that tower a lot of other ‘affordable’ smart TVs available in the market today. Xiaomi is teasing an ‘XL’ size for India, and while that in itself does not say much, chances are we are looking at something on the lines of a Mi TV initially, which is to say a screen size of around 55-inch.

Xiaomi has sold over 5 million ‘Mi’ smart TVs in India since entering the smart TV space in Q1 of 2020. The brand has continued to remain the top smart TV brand here since Q2 of 2018. Currently, it commands a sizable 30 percent share of the segment (and 50 percent share of Android TVs), and going forward, it is “looking to capture 40 percent market share with the help of its Redmi TVs.”

Mi TVs have already built quite a reputation for themselves with their exhaustive feature set and aggressive pricing, but “there is (still) space for a new brand,” Nilakantan said.

“About 170 million households have TVs but only a tiny fraction has a smart TV. There is a need to democratize this technology and that is where Redmi TV(s) will be different.”

Redmi TVs will be sold via online and offline channels, much like Mi TVs. They will also leverage Xiaomi’s existing network of 750+ service centres.

“Initially, there will be some overlap (between Mi and Redmi TVs) but our long-term vision is to offer bigger differentiation,” Nilakantan said giving the analogy of Redmi and Mi phones. The same way Xiaomi has been able to ‘massify’ the 108MP camera, for instance, it will also try and make smart TV technology more accessible to buyers. That differentiation will take some time though, as will establishing the Redmi sub-brand in this category. Nilakantan said it will take 6-9 months at least, to do that after which the brand expects it would start “selling Redmi TVs in equal volume (as Mi TVs).”

Software will still be an important differentiator, even for Redmi TVs. Like the Mi TVs, Redmi TVs will also run Xiaomi’s ‘content-first’ PatchWall “because we have already invested so much into the platform, added many features and optimizations, made partnerships.”

Nilakantan said Xiaomi hopes to bring the same experience to all Redmi TVs but some feature-set may vary depending on the hardware. The brand remains unclear about the monetization aspect at this point of time, but “it will be cognizant of family needs when it comes to curated content.” Nilakantan also did not commit if Redmi TVs will be based on Android Open-Source Project (AOSP) or if they will be Android TV-certified—so we will have to wait and watch out on that one. As for the hardware itself, “Redmi TVs will not be limited to being only HD-ready or FHD.”

Xiaomi has been making smart TVs in India for the last two years in partnership with Dixon Technology. Recently, it onboarded Radiant Technology as another partner to expedite domestic manufacturing of smart TVs at its newly set up plant in Telangana. “Right from the beginning, all Redmi TVs will be made in India,” Nilakantan said.