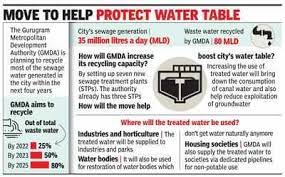 Gurgaon: The Gurugram Metropolitan Development Authority (GMDA) is drawing up a plan to recycle 25% of the total sewage generated in the city by 2022. The amount of treated waste water will be gradually increased to 50% in 2023 and 80% by the year 2025.

The matter was discussed during a GMDA meeting held on Wednesday, officials said. “GMDA is already recycling around 80 million litres a day (MLD) of sewage and we plan to take it up to 25% of the actual usage by 2022,” said a senior GMDA official. Realtor DLF is also treating 40 MLD of sewage and using it for horticultural purposes.

Currently, the city generates around 435 MLD of waste water. “When we add the DLF figures, we are already recycling over 25% of sewage. However, we are increasing the sewage treatment capacity for the coming years,” said the official.

In order to increase the recycling capacity, new sewage treatment plants (STPs) will be set up at several locations. GMDA already has STPs whereas another seven are in the pipeline.

Treated water is currently being used in industries and for horticultural purposes. “We are supplying treated water to the Aravali biodiversity park and Leisure Valley park. Eventually, it will also be used for water bodies which are being rejuvenated,” said the official. While many water bodies in the city are getting a facelift, they don’t get water naturally and will need it to be pumped into them.

GMDA is also laying down pipelines to provide treated water to residential societies. The per capita water consumption is around 150 litres a day, of which 20 litres is for potable use and the rest is for non-potable use such as horticulture and flushing. GMDA plans to cover most of the non-potable water usage with the treated water.

GMDA officials said the move will help bring down consumption of canal water and also help reduce exploitation of groundwater.

The city’s groundwater level, which has been declining at an alarming rate for several years now. Gurgaon witnessed a fall of 5 metres in its water table over the last two years, according to post-monsoon data recorded by the agricultural department’s groundwater cell. The city’s average groundwater level is around 38.7m at present. In the last 10 years, the water levels of the entire district have dipped by 7.7m.

Gurugram has already been marked as a ‘dark zone’ by the Central Ground Water Authority (CGWA). The city’s water extraction is three times more than its recharge, according to groundwater experts.

TOI had earlier reported that GMDA was planning to provide treated water to housing societies as well for non-drinking purposes. Work for laying pipelines for recycled water from STPs to societies is currently underway. Once the pipelines are laid, GMDA will supply treated water to a number of societies along the Southern Peripheral Road as a pilot project. Eventually, the metropolitan authority plans to lay pipelines for treated water across the entire city. However the project will take a few years, especially in Old Gurgaon, due to lack of space for the drains.