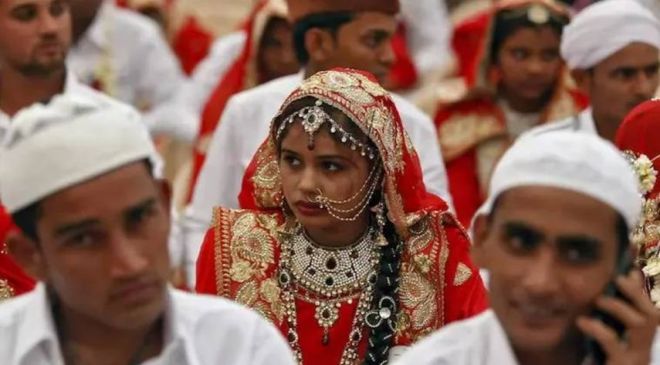 The amendment seeks to prohibit and punish religious conversion promising a better lifestyle, divine blessings, and impersonation on the pretext of marriage. The Bill was tabled in the state assembly by Legislative Affairs Minister Pradeepsinh Jadeja.

Gandhinagar: Following suit with Uttar Pardesh, the Gujarat Government passed a bill to amend the ‘Dharma Swatantrya’ (Freedom of Religion) Act, 2003 which aims to combat forceful religious conversions, better known as `Love Jihad`, on the concluding day of the ongoing Budget session on Thursday.

Tabled by the ruling BJP, the amendment seeks to prohibit and punish religious conversion promising a better lifestyle, divine blessings, and impersonation on the pretext of marriage. The Bill was tabled in the state assembly by Legislative Affairs Minister Pradeepsinh Jadeja.

The Gujarat Freedom of Religion Act, 2003 sought to deal with religious conversion through allurement, force or by misrepresentation, or by any other fraudulent means. However, the state government felt that there were episodes of religious conversion promising a better lifestyle, divine blessings, and impersonation.

The Bill witnessed a massive uproar in the house from the opposition and a Congress leader Imran Khedawala even tore the copy of the Bill.

Speaking about the provisions of the amendment Bill, Khedawala said, “Home Minister Pradeepsinh Jadeja has only mentioned that the daughters of the Hindu community are targeted by men from a specific community. Daughters, be it from any religious community, will always be our daughters. I too have over hundred testimonies of Muslim girls marrying into other religion. I am deeply hurt by the words of the minister”.

The Speaker of the House, Rajendra Trivedi, interrupted Khedawala but he continued speaking.

“Nobody can force anybody to marry into a specific religion and in no religion, it is written to forcibly convert anyone to accept that. In this Bill, only one community is specifically targeted with words like ‘Jihadi’. I opposite this Bill and I’m tearing down its copy,” Khedawala said as he tore the copy of the Bill which he had in his hand.

This was followed by an uproar from BJP members in the House.

What does the Bill against ‘Love Jihad’ Say?

As per the amendment, a forcible “conversion by marriage, or by getting a person married, or by aiding a person to get married” shall invite imprisonment of three to five years and a fine of up to Rs 2 lakh.

If the victim is a minor, woman, Dalit or tribal, the offender may be punished with a jail term of four to seven years and a fine of not less than Rs 3 lakh.

If an organisation violates the law, the person in charge can be sentenced to a minimum of three years and a maximum of ten years in jail. A fine of upto Rs 5 lakh can also be imposed in such cases.

The amendment also provides that a marriage solemnised for the purpose of unlawful conversion shall be declared void by a court.

The burden of proving innocence shall lie on the accused person.

Any aggrieved person, his/her parents, siblings, or any other person related by blood, marriage or adoption may lodge an FIR under the law.

The offences under the Act will be cognisable and non-bailable and shall not be investigated by an officer below the rank of a Deputy Superintendent of Police.

The BJP government had said it was necessary to prohibit “forcible conversion by marriage” and hence section 3 of the Act needed to be amended.