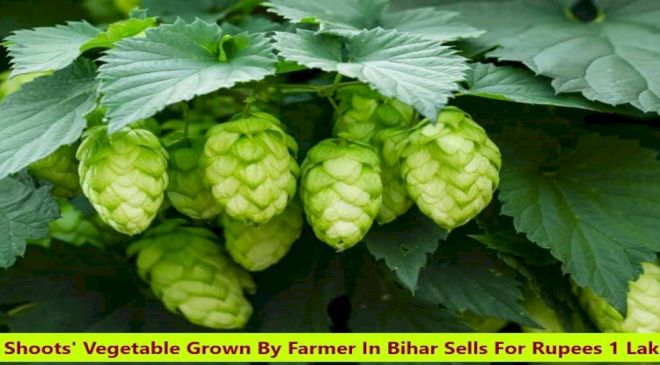 If you think about inflation each time you go out to buy vegetables, you would perhaps want to refrain from reading this but here’s why you shouldn’t. A farmer in Bihar is selling one of his farm-grown vegetables for a whopping one lakh rupees/Kg. The Bihar farmer named Amresh Singh is cultivating ‘hop shoots’, the world’s costliest crop. IAS officer Supriya Sahu tweeted a news article from the New Indian Express and the picture of the crops, “One kilogram of this vegetable costs about 1 lakh … Can be a game-changer for Indian farmers,” she wrote in her tweet.

Amresh Singh, 38, a farmer from Karamnidh Village of Bihar’s Aurangabad district is the first in India to take such a risky step. Amresh bought the saplings from the Indian Vegetable Research Institute at Varanasi. Until now Hops were a rare sighting in Indian markets and was bought only upon special orders and deliveries would also take very long.

The cultivation of Hops is being encouraged as it would help farmers grow financially.

Hops are essentially flowers (also called seed cones or strobiles) of the hop plant Humulus Lupulus. They are a member of the Cannabaceae family of flowering plants.

What makes it so special? According to studies, every part of the plant right from the fruit, flower to the stem has multiple usages. It is very useful to the beer industry as they serve as a stability agent. It is also a potential natural remedy for managing Tuberculosis. The antioxidants found in the vegetable could give you gorgeous skin. The shoots are also known to alleviate anxiety, insomnia and depression