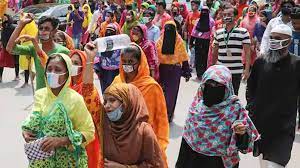 The Bangladesh government on Saturday announced a seven-day countrywide lockdown from Monday to curb the spread of Coronavirus.

DHAKA: The Bangladesh government on Saturday announced a seven-day countrywide lockdown from Monday to curb the spread of Coronavirus.

The announcement was made by Road Transport and Bridges Minister Obaidul Quader. The minister, however, said the factories and industrial areas will remain with limited workers.

“The factories and industrial areas will remain open during the lockdown with limited workers in different shifts maintaining hygiene rules,” State Minister for Public Administration Farhad Hossain also made a similar announcement.

Emergency services will not be affected during the lockdown, the minister said.

It may be noted that the number of daily infections and deaths from the virus has suddenly taken a steep sweep upwards over the past several days. The numbers are reaching new highs every day.

The current rising trend in daily infections and deaths is faster compared to even that recorded in June-July last year when the first wave of the pandemic reached its peak in the country.

Experts say this time the infection situation is very grave. If strict steps are not taken to control the spread, infections and fatalities will rise further, they warn.

The country also saw 50 new fatalities in the past 24 hours, according to the Directorate General of Health Services (DGHS). The death toll now stands at 9,155, with a 1.47% fatality rate.

Earlier on March 25 last year, the government initially declared a 10-day shutdown. It was extended several times further to keep the virus under control. Later the lockdown was relaxed after June as the number of cases and deaths from the virus went down.