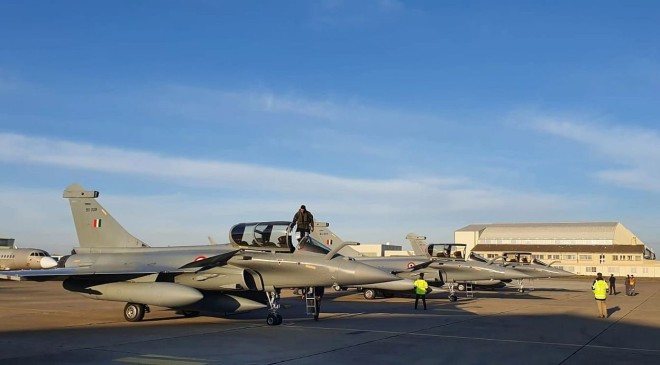 The 2016 deal for the sale of 36 Rafale jets to India involved a 1.1 million Euro payment made by aviation major Dassault to a middleman in India, French publication “Mediapart” has alleged in a report based on an investigation by the country’s anti-corruption agency. Dassault has claimed the money was used to pay for 50 replicas of Rafale jets but has been unable to provide any document or photograph as evidence that these were delivered.

The middleman is accused of money-laundering in India in another defence deal, the portal says in the report.

“The company (Dassault) said the money was used to pay for the manufacture of 50 large replica models of Rafale jets, even though the inspectors were given no proof that these models were made,” Mediapart reported.

The allegations were first uncovered by the French anti-corruption agency Agence Francaise Anticorruption (AFA) during their audit of Dassault, according to the report.

But the AFA “against all apparent logic” decided not to refer the case to prosecutors, it said.

“As they combed through the 2017 accounts, the AFA inspectors raised an eyebrow when they came across an item of expenditure costing 508,925 euros and entered under the heading ‘gifts to clients’,” the AFA report said.

“The sum was indeed huge for a gift. Though French law does not set out precise limits, legal precedents suggest that giving a watch or an expensive meal costing several hundred Euros can be enough to constitute corruption.”

The report said to justify this “larger than usual gift” Dassault supplied the AFA with a proforma invoice dated March 30, 2017, which was supplied by an Indian company called Defsys Solutions. “This invoice, which related to 50 per cent of the total order, was for the manufacture of 50 models of the Rafale C, with a price per unit of &#8364;20,357,” the AFA report said.”

Defsys Solutions is run by Sushen Gupta, who is being investigated by the CBI and Enforcement Directorate in the AgustaWestland case involving kickbacks paid in India in a deal for VVIP choppers. Defsys is one of the subcontractors of Dassault in India.

Sushen Gupta was earlier arrested and granted bail in the chopper deal case.

The AFA inspectors asked Dassault for an explanation. “Why had Dassault ordered an Indian company to make models of its own aircraft at 20,000 Euros a plane? Why was this expenditure entered in the accounts as ‘a gift to client’? And were these models, each one of which was supposed to be the size of a small car, really ever made?”

According to Mediapart, “Dassault was unable to provide the AFA with a single document showing that these models existed and were delivered, and not even a photograph. The inspectors this suspected that this was a bogus purchase designed to hide hidden financial transactions”.

“An investigation conducted by French Anti-Corruption Agency – AFA has now revealed that after signing of the deal in 2016, Dassault paid 1.1 Million Euro to a middleman i.e. Defsys Solutions. This amount was shown as ‘Expenditure by Dassault’ as ‘Gifts to Clients’,” Congress spokesperson Randeep Surjewala said.

“Does it now not require a full and independent investigation into India’s biggest defence deal to find out as to how much bribery and commission in reality, if any, was paid and to whom in the Indian government?”