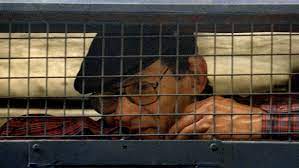 The release of the ‘The Serpent’ through the 8-part Netflix drama series on 2 April, 2021 led my thoughts to 2003 when Charles Sobhraj was arrested in Kathmandu and I had been posted there.

Out of curiosity, I went to the Internet Movie Database web site (imdb.com) to check out the review and whether the circumstances that led to his arrest had been mentioned. Were there characters called Joseph Nathan or S Ramesh in the series? No.

But here is how the arrest of this infamous serial killer happened.

Charles Sobhraj in Nepal on the Eve of His Arrest

Sobhraj had arrived in Kathmandu on 1 September, 2003 and booked himself into a Thamel hotel. It is ironical he opted to stay in downtown Kathmandu as Thamel was the one place the hippies would congregate in 1975. Just off Thamel was the famous ‘Freak Street’, known for its hashish cafés.

Though my memory is a bit hazy now with passing time, I recall that Sobhraj was meeting people and talking to them about either the Pashmina export business or investing in a mineral water plant in the Himalayas in the day.

Joseph Nathan (Joey), Adviser of ‘The Himalayan Times’ (THT), an experienced journalist who was running a newspaper, had also found a new hobby in playing blackjack at the casinos. Possibly, it was on one such balmy September evening and soon after Sobhraj’s arrival that Joey found himself at the very James Bond sounding Casino Royale of the Hotel Yak & Yeti in central Kathmandu.

A Balding Gentleman in a Kathmandu Casino

Joey’s curiosity was kindled when he spotted an elderly balding gentleman at the casino that vaguely resembled Sobhraj but not quite fitting the well known image of a bespectacled beret wearing person.

Yet, Joey decided to follow his journalist instincts as he was quite certain that the person was Sobhraj. He requested the guest relations manager to cater to Sobhraj’s needs to their best capacity so he wouldn’t check-out. At the same time, he constituted a small team of his newspaper colleagues to follow Sobhraj around and even take photographs of him in Thamel as part of gathering evidence.

Sobhraj had started to wear a baseball cap instead of his beret and his aged profile was proving difficult for this team to reconcile with that of the internationally infamous criminal. Once or twice, when confronted, he also denied being Sobhraj. This impromptu surveillance went on for a few days.

When I Recognised Charles Sobhraj in the Casino

As I had evinced some interest, Joey had volunteered to teach me to play blackjack. Though in 2003, going to a casino in Kathmandu was not taboo and it used to be a fun evening outing, with a variety folk show on display and good food, there was still an element of reluctance on my part being a diplomat.

It was September 16, 2003 when I found myself in the Casino Royale for the first time along with another businessman friend, the both of us, to be taught the intricacies of blackjack. Possibly after few futile attempts by Joey to explain to us on how to get close to 21 and not beyond, he wandered off, but returned soon enough, prodding me to take a walk with him. He then pointed to a person sitting at another table and asked me whether I recognised him.

By sheer coincidence, Sobhraj was in the casino and Joey had his confirmation that evening. The card-playing party broke up soon thereafter as news came in of the tragic passing of the wife of a close friend of a lot of us in Kathmandu. The businessman friend and I went to console our mutual friend.

Joey, however, rushed off to work on the scoop that he now was sitting on.

The Himalayan Times emblazoned its headlines in its 17 September edition, noting the incognito presence of ‘The Serpent’ in Kathmandu. The Nepal police, then swung into action. Strangely unconcerned that police had been looking for him and even raiding hotels in Thamel, Sobhraj was spotted by the police in Casino Royale late on 18 September evening and was arrested from there for the 1975 murders of a Canadian called Laurent Carrière and an American Connie Jo Bronzich in Nepal.

Why Sobhraj chose to leave the secure and quiet Parisian surroundings where he had been living since his release from Tihar Jail and subsequent deportation to France in 1997 and return to Kathmandu in 2003, despite knowing there were arrest warrants still out for him, has been a matter of continuous speculation. He, himself, has added grist to the mill.

Wild Theories on Why Charles Sobhraj Went Back to Nepal

At the time of his arrest, he told Nepal Police that he owns a film production company in Paris and came to Kathmandu to shoot a TV documentary on local handicrafts.

Now aged 76, Charles Sobhraj alias The Bikini Killer alias The Serpent is still in prison in Kathmandu after being awarded a life sentence on 20 August 2004. It is learnt that Sobhraj is suffering from memory loss/dementia. He is hardly in a position to recognise people and recall much of his past.

Sobhraj thought no one would recognise him in Kathmandu as 28 years had elapsed after his killing spree in Nepal. To his misfortune, one eagle-eye journalist and an aspiring cardsharper-cum-diplomat just happened to be at the right place at the wrong time for him.