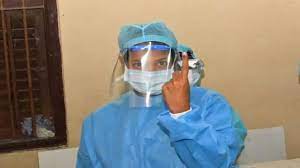 Kanimozhi arrived in an ambulance from the hospital where she is being treated for the infectious disease and voted in the single-phase assembly election’s final hour, earmarked for COVID-19 patients.

Dravida Munnetra Kazhagam (DMK) leader and Member of Parliament Kanimozhi, who had tested positive for COVID-19 recently, cast her vote clad in a personal protective equipment (PPE) suit, at a polling station in Chennai’s Mylapore on April 6.

The 53-year-old DMK leader arrived in an ambulance from the hospital where she is being treated for the infectious disease and voted in the single-phase election’s final hour, earmarked for COVID-19 patients.

Kanimozhi was campaigning across Tamil Nadu ahead of the assembly polls before she tested positive for COVID-19 on April 3.

“I was able to vote today, despite my health condition. Thanks to the Election Commission for ensuring that being unwell was not an impediment to choosing our next Government,” the Lok Sabha member from Thoothukkudi parliamentary constituency said in a tweet along with her picture from the polling booth.

In the wake of the pandemic, the Election Commission has earmarked the last hour (6 pm-7 pm) of polling for voters affected by COVID-19 or those suspected to be infected by the virus.

Tamil Nadu, which went to polls to elect a new 234-member state assembly, saw a provisional voter turnout of 67.64 percent.

The election campaign saw a tough battle between the governing All India Anna Dravida Munnetra Kazhagam (AIADMK) led by Chief Minister Edappadi K Palaniswami and former deputy chief minister MK Stalin-led DMK. While the AIADMK contested the elections along with the Bharatiya Janata Party (BJP), the DMK was in an alliance with the Congress.