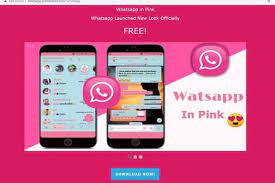 WhatsApp users in India are reporting that they are receiving a link on their WhatsApp that says it will turn the app’s theme from green to pink. The link also promises new feature to WhatsApp users, according to user reports online. The message that WhatsApp users are getting is disguised as an official update from the Facebook-owned messaging platform. Rajshekhar Rajaharia, an Internet security researcher also warned users on Twitter. In a tweet, he said that the malicious link can gain complete access to a user’s smartphone and the user will lose access. The “Pink WhatsApp” link is an APK link, which makes people believe that it will install and external APK file on their smartphones.

Users are advised to stick to the basics and never install any APK or mobile app other than the ones available on the Google Play Store or the Apple App Store. Such malicious apps can be used to compromise a user’s smartphone and steal important data. It can be used to capture and steal banking passwords. The Pink WhatsApp or a WhatsApp Gold that had surfaced earlier are cases of malware impersonating as fake WhatsApp feature apps, a cyber security expert was quoted in a TechRadar report as saying.

WhatsApp has not said anything about this specific case. The company was quoted in a report as saying that anyone can get an unusual, uncharacteristic or suspicious message on any service, including email, and anytime that happens, the company strongly encourages everyone to use caution before responding or engaging. On WhatsApp, in particular, we also recommend that people use the tools that WhatsApp provides within the app to send as a report, report a contact, or block contacts.

We have asked WhatsApp for a separate response on the same and will update this space as soon as the company responds to our query.