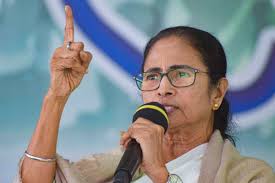 Vaccines and medicines are being shipped abroad even as there is a scarcity of these items in the country,” she told the rally. She claimed that this election is a fight to save West Bengal and “protect the honour of the Bengali mother”.

Lashing out at Prime Minister Narendra Modi, West Bengal Chief Minister Mamata Banerjee on Wednesday alleged that the second COVID-19 wave in the country and its management is a “Modi-made disaster”. Addressing an election rally at Balurghat in Dakshin Dinajpur district, the TMC chief asserted that West Bengal will be run only by a “Bengal engine government” and not by “Modi’s double-engine”.

“The second COVID wave is more intense. I would say this is a Modi-made disaster. There are no injections or oxygen. Vaccines and medicines are being shipped abroad even as there is a scarcity of these items in the country,” she told the rally. She claimed that this election is a fight to save West Bengal and “protect the honour of the Bengali mother”.

The TMC chief also urged people not to vote for Left- Congress-ISF alliance candidates claiming that voting for them will strengthen the BJP’s hand. Banerjee said that the Centre had said seven months ago that the pandemic has subsided.

“Now, with elections underway in West Bengal, the BJP is bringing in people from other states and spreading the infection among the people here,” she said. She said that her administration is finding it difficult to set up safe homes as many government accommodations are being used to house central forces.

“We are finding it difficult to set up safe homes. Although we have increased the number of beds, I would suggest that patients who don’t have severe symptoms, please remain in home isolation,” Banerjee said.

He also asked COVID patients with mild symptoms to cast their votes after 6 pm. Banerjee claimed that the BJP is saying different things at different places on the Citizenship (Amendment) Act or CAA and the National Register of Citizens (NRC).

She said that refugees who have come to West Bengal have been given land rights. “You are all citizens of the state. So don’t worry. I will act as a watchman,” she said.

Banerjee said that in the last 10 years, the TMC government has built roads, hospitals, bridges, stadia and an industrial centre in Dakshin Dinajpur district. Elections to the 294-member state assembly are being held in eight phases from March 27 to April 29. Results will be announced on May 2.