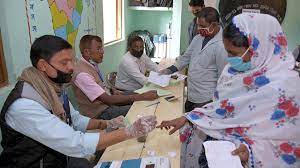 The Bharatiya Janata Party (BJP) pins its hopes on two former Trinamool Congress (TMC) leaders, Mukul Roy and Arjun Singh, in the sixth phase of West Bengal’s assembly elections on Thursday. The BJP is depending on them to deliver seats in North 24-Parganas, the state’s biggest district. Another key factor in this phase — in which 43 seats are up for grabs — is the Matua vote; the BJP has tried to woo this section with its promise of implementing the Citizenship (Amendment) Act, or CAA.

Singh is an influential figure in North 24-Parganas’ Barrackpore, the Lok Sabha seat he won in 2019 by upsetting two-term TMC MP Dinesh Trivedi (the latter joined the BJP in March). Before that, Singh had been a TMC legislator from Barrackpore’s Bhatpara for four times since 2001. With Singh fighting the Lok Sabha elections, his son, Pawan, won the Bhatpara seat in a bypoll in 2019, defeating TMC minister Madan Mitra.

The son is in the fray again from the same seat that votes on Thursday. Singh’s brother-in-law, Sunil, is fighting from Noapara, a seat he won as a TMC candidate in a 2018 bypoll. But this time, Sunil too is with the BJP.

“It is a classic family of back-stabbers…They must be defeated,” a TMC leader in Barrackpore said.

Singh told News18 that he anticipated trouble during the voting process, alleging that the TMC would try to stop his core voters. “There will be a lot of jhamela (trouble)…the TMC will not allow fair voting. The local police are beating up voters, stopping them from coming out of their houses. Central forces should intervene,” Singh said.

Besides Singh, the BJP is also banking on Roy, who is credited with the party’s success in Bengal in the national elections two years ago; the BJP won 18 of the state’s 42 Lok Sabha seats in 2019.

Roy is contesting the Krishnanagar North seat in Nadia district. His son, Subhranshu, a two-time TMC MLA, is fighting from Bijpur in neighbouring North 24-Parganas as a BJP candidate.

Both Singh and Roy are seen as major players who helped the TMC build and retain its dominance in North 24-Parganas, before they shifted to the BJP and helped the saffron party make a mark in the district for the first time in 2019. Seventeen seats in North 24-Parganas are polling in the sixth phase, while 16 will vote in the eighth, and the last, phase.

Another major factor in this district is the Matua vote. Matuas, who are Hindu Dalit refugees from Bangladesh, have a strong presence in constituencies such as Bangaon, Gaighata and Habra, among others.

The BJP won the Bangaon Lok Sabha seat for the first time in 2019; the Matua headquarters of Thakurnagar falls in this constituency. A large section of Matuas is believed to be backing the BJP with the party’s promise to implement CAA resonating among them. CAA fast-tracks citizenship of Hindus, Sikhs, Jains, Buddhists, Christians and Parsis who have arrived in India from Pakistan, Afghanistan and Bangladesh before 2015.

The BJP has fielded Subrata Thakur, the younger brother of Bangaon MP Shantanu Thakur, from the Gaighata assembly seat, in another outreach to the Matua community. This is a tough seat, as the TMC has won it four times in a row since 2001.

Other important seats going to polls in the sixth phase are in Nadia, Uttar Dinajpur and Purba Bardhaman districts.