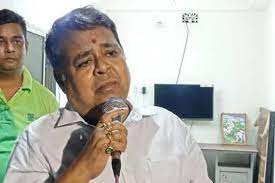 Trinamool Congress Candidate from Khardah Kajal Sinha who was previously found to have contracted the coronavirus breathed his last on Sunday.

The news was shared by West Bengal CM Mamata Banerjee on Twitter who was found extending her condolences to the family of the deceased.

Notably, three candidates have died due to Covid during the Bengal polls, while at least half a dozen candidates have contracted the infection, apart from star campaigners such as Adhir Ranjan Chowdhury and Manoj Tiwari.

Trinamool Congress leader Madan Mitra who was admitted to SSKM on Wednesday afternoon and later shifted to a private hospital late in the evening with severe respiratory distress also tested positive for Covid on Thursday. Mitra who is contesting from Kamarhati Assembly constituency fell ill on April 17 on the day of the phase V election.

Meanwhile, the Election Commission (EC) in its order on Thursday prohibited roadshows and Padyatras in poll-bound West Bengal in wake of a surge in COVID-19 cases. The EC also restricted the number of people’s participation in public meetings to 500.

Polling for the seventh and the eight-phase in West Bengal will be held on April 26 and April 29 respectively. The counting of votes will be done on May 2.