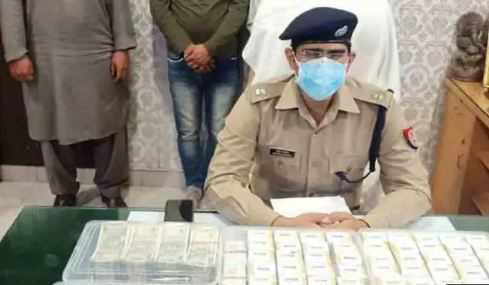 The Ghaziabad Police recovered 70 vials of Remdesivir injections along with cash over Rs 36 lakh earned by hoarding the drug used in the treatment of COVID-19 infection. Police have seized a car and two motorbikes used in the crime.

His two accomplices — Kumail of Kaila Bhatta in Ghaziabad and Jazim Ali of Bara Hindu Rao in Delhi — have been nabbed along with the doctor as the trio were searching for family members who were in dire need of the life-saving injection for COVID-19 patients and charged between Rs 30,000 to 40,000 per injection.

Altamash was black-marketing Remdesivir injections after procuring vials from medical stores on doctors’ prescriptions and selling these drugs to needy patients. A big nexus was involved in it and everybody was getting his own share in profit, City Superintendent of Police (1st) Nipun Agarwal told media.

He added that police have recovered 70 vials of Remdesivir injections along with cash over Rs 36 lakh earned by hoarding the drug. Police have seized a car and two motorbikes used in the crime, Agarwal said, adding that police teams are interrogating the accused for further information about more such gangs.

During the interrogation, Altamash said that he holds a MBBS degree from KGMU Lucknow and has pursued DNB/DM in Neurology from Vivekananda college in Lucknow. He was a visiting physician at New Delhi’s AIIMS Hospital. At present, he was working as a CEO of Hyatt Health Insurance Corporate Sector. He told police that being from the medical field, he had many contacts through which he was selling Remedesivir in Delhi and Western Uttar Pradesh regions. He said that he was selling Remdesivir injections for 20,000-40,000 and Actamera injection for Rs 1-2 lakhs.

The police has recovered the cash earned through black marketing of Remdesivir injection from him. The police team has been awarded a prize of Rs 25000 for busting the racket.