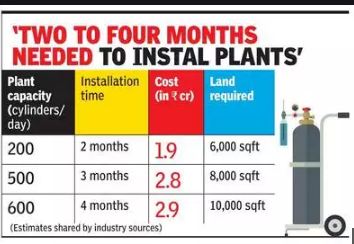 Gurgaon: The Centre will help set up 50 plants for medical oxygen across Haryana, six of which will be in Gurgaon.
The roadmap to generate medical oxygen locally and cut down on transportation time, the biggest challenge before oxygen consignments reaching hospitals on time, was shared by Union minister and Gurgaon MP Rao Inderjit Singh at a video-conference with the deputy commissioners of Gurgaon, Rewari and Mewat on Wednesday.

Singh said along with the Defence Research and Development Organisation (DRDO), other agencies like the National Disaster Management Authority (NDMA) and government departments are working in tandem on the plan to build local oxygen plants.

Industry sources said setting up these plants would take two to four months after land is identified, depending on capacity. A plant that can fill 200 cylinders a day will take two months to set up, a source said, while for bigger plants that can churn out enough oxygen for 500 -600 cylinders, the installation time is three to four months.

Singh said besides Gurgaon, oxygen plants will also be set up at Rewari, Mahendergarh and Mewat as well. Hospitals in Rewari have been facing acute oxygen shortage. “We will invite tenders as soon as funds are received from the central government. A meeting will be held with all stakeholders to ensure that the plants are up and functional before the third wave which, according to reports, is expected in July-August,” he said.

Read more:150 beds to be ready at vacant flats in Gurgaon next week

Additional chief secretary (health) Rajeev Arora said the company that will set up the oxygen plants is yet to be decided. He said the government was aiming to set up these plants in less than a month’s time.

According to an official, the medical oxygen plants (MOPs) that have been planned are designed for a flow rate of 1,000 litres per minute (LPM). These can charge 195 cylinders per day. The technology has been developed by the DRDO.

Singh further said the state government will give an oxygen tank to Nalhar Medical College in Nuh, which will add to its oxygen storage capacity, and will also get the ventilators lying defunct functional.

Gurgaon deputy commissioner Yash Garg said the efforts to set up oxygen plants have been stepped up. He said local oxygen plants were the need of the hour and sooner they were set up, the better for hospitals, which can expect their daily supplies without delays. “We got additional four metric tonnes of oxygen on Wednesday and I hope the situation will be better. We were getting around 43 MT of oxygen daily but on Wednesday, we got 47 MT,” he said.

Haryana health minister Anil Vij, meanwhile, said oxygen plants will be set up with the support of the central government in various hospitals in the state with capacity of 30, 50, 100 and 200 beds. Vij, who inspected an oxygen plant installed set up at the Civil hospital in Ambala city, said within the next few days, oxygen plants will become functional in Faridabad, Panchkula, and Hisar too, adding the government was working towards making hospitals self-sufficient on oxygen needs.