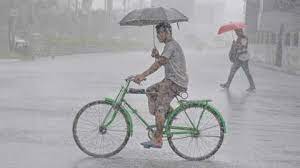 Following the lead of India’s cyclone-hit southern and western states, parts of the Northeast are now set to witness some intense rainfall activity as well, with heavy rains set to lash the region for the next three days.

According to The Weather Channel’s met team, a cyclonic circulation located over the Northeast will give rise to widespread rains, thunderstorms, and gusty winds blowing at 30 to 40 kmph across the region.

The rainfall activity will be especially intense till May 21, with rain totals in excess of 100 mm a day expected over Arunachal Pradesh, Assam and adjoining places.

Apart from the heavy precipitation, these areas will also be at the risk of facing swollen rivers and mudslides due to the drag on rain activity, weather.com meteorologists have warned.

In view of these predictions, the India Meteorological Department (IMD) has issued a yellow watch over the entire northeastern region on May 19 and May 20.

Come May 21, Assam and Meghalaya will be the only two states to retain the same advisory, which urges residents to ‘be aware of the local weather situation.

Within Assam, the IMD’s regional met centre in Guwahati has issued thunderstorm warnings over most districts.

The intense rain activity has been ongoing since Tuesday, with the IMD observing heavy rainfall at isolated places in Assam and Meghalaya during the morning and afternoon hours of Tuesday.

Meanwhile, since the beginning of the pre-monsoon season on March 1, a majority of the northeastern states have recorded below-normal rainfall as compared to their respective average figures for this period.