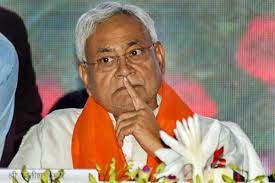 A total of seven persons were killed due to cyclone Yaas in Bihar, even as moderate to heavy rainfall was received in most parts of the state on Friday because of a low pressure area that has been formed across the state in the wake of the cyclonic storm. One person each died in the cyclone in Patna, Darbhanga, Banka, Munger, Begusarai, Gaya and Bhojpur.

Chief Minister Nitish Kumar expressed grief over the deaths, an official statement said here. Kumar ordered immediate payment of Rs 4 lakh ex-gratia each to the families of those who died.

The chief minister also gave direction that four injured in cyclone in Begusarai and one each in Gaya and Banka should be provided proper medical treatment. Kumar issued an appeal to the people of Bihar to “take all precautions in accordance with the warnings issued by the weather department”, and assured that efforts were being made to ensure uninterrupted supply of power and water and smooth flow of vehicular traffic.

After battering Odisha and West Bengal Wednesday, severe cyclonic storm Yaas impacted Jharkhand and Bihar since May 26 midnight. Moderate to heavy rainfall was witnessed in majority areas of the state due to cyclone.

According to S K Mandal, an official at the weather office here, north Bihar districts like Katihar and Saran received rainfalls close to or more than 200 mm. Patna district, which is being swept by strong breezes, has received more than 90 mm of rainfall since the previous day, resulting in heavy water-logging in many parts, including posh localities of the capital city.

The opposition RJD issued a statement, charging the Nitish Kumar government with letting the city “drown” in the wake of heavy rains. Air traffic, which was disrupted Thursday evening because of bad weather, resumed in the morning.

The Airport Authority of India said on its official Twitter handle that flight operations had been suspended till 9 A.M. but were resumed thereafter after officials reviewed the conditions and gave their nod. The weather department also predicted light to moderate heavy rainfall on Saturday in most parts of north Bihar.