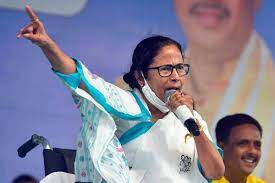 It has been an occasion of yet another face-off between the Centre and the state of West Bengal. Prime Minister Narendra Modi was on a visit to Odisha and West Bengal on Friday to assess the damage caused by Cyclone Yaas. After finishing his Odisha leg of the tour, when PM Modi arrived in Bengal, chief minister Mamta Banerjee, who was present on the premises, did not come and receive him at the airport.

Sources said Prime Minister Narendra Modi and Bengal governor Jagdeep Dhankar, along with Union Ministers Dharmendra Pradhan and Debashree Chaudhari, were made to wait for half an hour before the Banerjee briefly showed up. Those present in the meeting tell us the Banerjee stormed into the meeting only for a few minutes and handed over a bunch of papers to the prime minister as an assessment of the damage caused by the cyclone before excusing herself and rushing out citing certain previously planned commitments.

What came as a bigger shock is that despite the presentation being loaded on the screen, Banerjee did not allow the chief secretary or the home secretary to even do a presentation before the prime minister. Critics call this an example of deep-rooted arrogance and disregard for the highest chair in the Government of India.

This is the latest flash in the pan as far as Banerjee and her face-off with Prime Minister Narendra Modi is concerned.

But is it the first time? The answer is certainly no.

Banerjee had expressed displeasure for not being allowed to speak at the meeting of Prime Minister Narendra Modi with the district magistrates of different States on May 20 where other chief ministers were also invited.

Sources in the government had said that the district magistrate of North 24 Parganas was meant to speak at the meeting but he was, however, blocked by Banerjee saying that if she was present she would speak.

Banerjee had expressed her anger publicly against Prime Minister Narendra Modi earlier too, on January 23, 2021 at the Victoria Memorial where the 125th birth anniversary of Netaji Subhash Chandra Bose was being observed.

Objecting to the welcome by slogans of ‘Jai Shri Ram’ by BJP supporters, Banerjee, who was present on the dais with Prime Minister Narendra Modi, refused to speak when her turn came. She protested saying that shouting such slogans at a government programme was an insult to an elected chief minister and her position.

Sources in the government said that out of six to eight meetings called by Prime Minister Modi in the last year on Covid, the TMC chief has attended just two. This also includes a meeting that was held amid election campaigning where Mamata had refused to attend a meeting citing election campaign priority.

In December 2014, Banerjee had given a miss to the planning committee meeting called by the prime minister. Also in July 2015, when the government had called a meeting of all chief ministers to discuss the land acquisition bill issue, Banerjee gave it a miss.

In June 2019, Banerjee skipped the meeting of the Niti Aayog governing body. In the same month, when the prime minister had called for a meeting of all party presidents to discuss the ‘one country one election issue and to look at the possibility of putting that into practice with the consensus, the TMC chief along with DMK chief MK Stalin and TDP chief Chandrababu Naidu had chosen to skip that meeting.

Early this year too in February, Banerjee had skipped the Niti Aayog meeting chaired by Prime Minister Narendra Modi.

Banerjee has been a fiery fighter. She has just been elected as the chief minister of Bengal for the third term in a row. Her utter disdain for the BJP leadership, especially in the backdrop of the bitterly fought Bengal elections, has been out in the open.