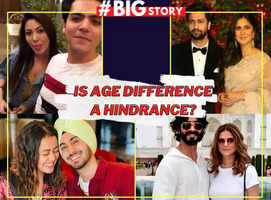 Way back in mid-80s when this journalist was in college- if a student in his third year of graduation went out for a coffee (in a South Indian restaurant, there were no fancy cafes then) with a girl in her first year of junior college, he was ridiculed by his friends that couldn’t he have avoided going out with a child? But if the girl was older, she was obscenely told by her friends that she wanted a toy-boy. We were changing. It seemed that Mansoor Ali Khan Pataudi-Sharmila Tagore and Dilip Kumar-Saira Banu love stories may remain only a thing of the past.
But today, 35 years later, we live in a society, which unfortunately still judges women and has different rules for them but has thankfully started to assimilate, largely only in the rich and famous circles- that age is no bar in love. The privileged class definitely has been a beneficiary of this partial awakening and have now in fact, started leading the way- Munmun Dutta-Raj Anadkat (9 years), Katrina Kaif-Vicky Kaushal (5 years), Neha Kakkar-Rohanpreet Singh (10 years), Nandita Mahtani-Vidyut Jamwal (10 years), Gauahar Khan-Zaid Darbar (8 years), Priyanka Chopra-Nick Jonas (10 years)- the numbers in brackets denote the age-gap. The list is actually long.

Such affinity however can come with its fair share of pros and cons. Let’s debate how easy or difficult it can get for them and anybody else for that matter, if their partner is much older or younger than them. That’s our #BigStory this weekend.

Joining in first is the buoyant Kashmera Shah, who is 12 years older than her husband Krushna Abhishek. Kash (as she is fondly called) says, “Krushna and I don’t realise that there’s an age gap at all. We have been together for 15 years and have literally grown up with each other. Time is not calculated in years that you spend on Earth but how you spend those years.”

Riya Sen, when contacted, offered, “I feel like one can benefit from the maturity that an older partner can bring into a relationship. When I mean older, I’m talking about a gap that might be more than 10 years between the partners. It’s especially beneficial in sensitive situations wherein an older partner’s accumulated life experiences can help put the right perspective in place so as to diffuse such situations and help maintain a healthy and respectful relationship. A healthy relationship is all about inclusion and acceptance of each other’s differences but such couples can experience such a gap being wedged between them that it becomes and remains a point of confrontation. This can be the effect of the energy levels and peer circles differing between the two.”

But her sister Raima Sen dropped a bomb, when she bindaas (no-holds-barred) revealed that she has dated older and younger men both and spices it up by saying, “Actually, they are both fun. Women look up to older men, they feel safe and protected. Ditto for me. But someone younger may be fun. Younger men are easy to read. Actually, older men are also fun. When I was younger, I wanted to date an older man. Today, hmmm… I would prefer someone younger, maybe 2 or 3 years younger than me.”

Koena Mitra seems to love the concept of older woman-younger man. Explaining it, she said, ‘Men fail to handle demands. Older women are less demanding, plus they’re mature and stable.”

A source close to Nandita Mahtani chipped in, “After she ended her on-off relationship with Dino Morea, it didn’t surprise us that Nandita started dating Vidyut.” The source evaded the question if Nandita’s engagement surprised and continued almost in the same breath, “Haven’t there been reports of her dating a 10-years younger hero whose name is not Dino Morea? And what’s wrong?”

Katrina Kaif is dating Vicky Kaushal who is nearly 5 years younger to her and that’s no secret. Katrina’s make-up artist Subhash Singh (who also produced ‘Chalk-n-Duster’ starring Shabana Azmi and Juhi Chawla) told ETimes, “Even I don’t think it’s wrong. In fact, I am of the opinion that a relationship works for a longer time if there is an age-gap, the older person deals with the younger one more tactfully. I also think the older one pampers. Look at the intensity of love that Saira Banu and Dilip Kumar had for each other. Arjun Kapoor and Malaika Arora had to face so many things but isn’t their love as strong as it was before?” Coming to Katrina, he says, “Katrina dil se pyaar karti hai, woh umar nahin dekhti (she loves a person from the bottom of her heart and does not consider how old he is).’ She has never been a dominating person in her relationships. Salman was 17 years older than her, and as I said the senior is very careful in his/her approach with the junior, Salman sir always explained her things patiently and bypassed her mistakes.”

However, Ayesha Jhulka sharply advocated marriages wherein both partners’ age is nearabouts the same. But celebrity divorce lawyer Ishika Tolani countered, “If the couple is of the same age, often they both tend to be equally hot blooded.” So, is Tolani advocating age-gap marriages? “They have a flip side. Sexual attraction always goes away after about 4 years in every marriage. Plus if the gap is substantially large, the younger partner may find the older partner to be too old for his/her liking and might start exploring for options outside.”

Another celebrity lawyer Vandana Shah said, “Extra-marital affairs continue to happen irrespective of the straying husband or wife’s age. An actress who was fighting an ugly divorce dated a married entrepreneur who knew from Day 1 that he won’t marry her because he comes from a very conservative family, it was just an affair for him.” Jhulka eschewed a similar viewpoint, “If one partner is not getting the entire emotional and physical satisfaction from his spouse, he/she tends to stray.”

But Renuka Shahane almost poured a bucket of water on these plethora of views when she said, “I don’t think you can judge the love-life of a person depending on his/her age-gap with his other half. Live and let live.”

Last word? The less-privileged class may be still refraining to deep dive into choices which are not nearabouts their age, but is the day far off when age will just be a number for them too?