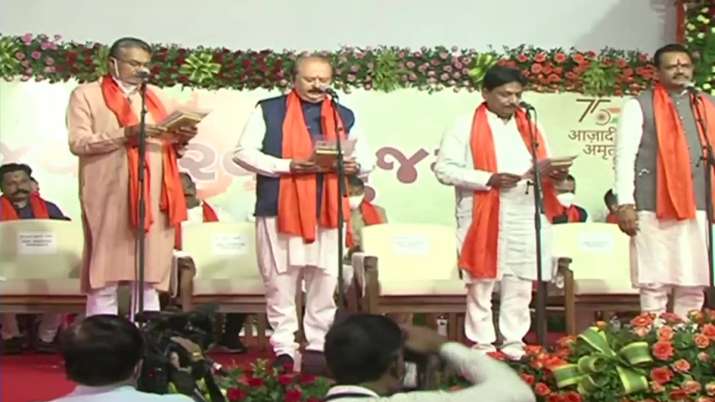 Gujarat Cabinet: In presence of Bhupendra Patel and his predecessor Vijay Rupani, Governor Acharya Devvrat administered the oath of office to 10 cabinet ministers and 14 ministers of state, including five ministers of state with independent charge

A brand new cabinet took oath in Gujarat today — with Bhupendra Patel at its head — over-riding protests by former ministers who had to step down along with former Chief Minister Vijay Rupani last week. The outcome was inevitable, with Prime Minister Narendra Modi and Union Home minister Amit Shah pushing for a “no repeat” formula ahead of next year’s assembly elections in the state.

Still for over 24 hours, the dissent, accompanied by a flurry of meetings, caused considerable disruption that ended with the oath ceremony being pushed back by a day.

This afternoon, in presence of Bhupendra Patel and his predecessor Vijay Rupani, Governor Acharya Devvrat administered the oath of office to 10 cabinet ministers and 14 ministers of state, including five ministers of state with independent charge at the Raj Bhavan.

Former Assembly Speaker Rajendra Trivedi – who stepped down from the post earlier today — and former state BJP president Jitu Vaghani were part of the ministry.

Sources had indicated that the dissidents who wanted to be part of the new cabinet — including Mr Rupani’s deputy Nitin Patel — will have to capitulate, given the backing for this hard reboot.

“Even the top leaders will have to accept whatever the leadership says because of the stature of Narendra Modi and Amit Shah and no politician, especially in the BJP in Gujarat, can openly challenge the calls they take,” an MLA had told NDTV off the record.

The change of guard in Gujarat was apparently made necessary by Mr Rupani’s handling of the second wave of Covid earlier this year, with multiple hospital deaths due to lack of oxygen being reported.

Prime Minister Narendra Modi, sources said, had pushed for the change in view of the coming elections, in which the BJP is hoping for a seventh consecutive term.

The shock resignation was followed by the equally unexpected choice of a first-time MLA for the top post.

Mr Patel – said to be the compromise candidate amid several prominent names – took oath in Gandhinagar on Monday in presence of Amit Shah.